Visitors win for the first at WIN Stadium in a bizarre NRL clash.

The Manly Sea Eagles secured their first ever victory at WIN Stadium against the St George Illawarra Dragons, as they hung on against the fast finishing home side 24-18.

After jumping out to an early 18-0 lead inside the first 20 minutes the scored looked like it could have been anything for the visitors.

But a shocking completion rate for the last hour of the game meant Geoff Toovey and his side were simply luck to escape their road trip with the two competition points.

St George battled well to get back into the game, off the back of a glut of possession early in the season half, as Manly finished the game with just 40 per cent of the ball.

But too often the Dragons took the wrong choices in attack as time ran out, as they, at times, pushed too hard for what would have been a morale boosting win.

However, both sides will be sweating on the fitness of two of their stars after they played no part in the second half.

St George winger Brett Morris suffered a left knee injury when he was tackled across the sideline in the midst of attempting to score a try. 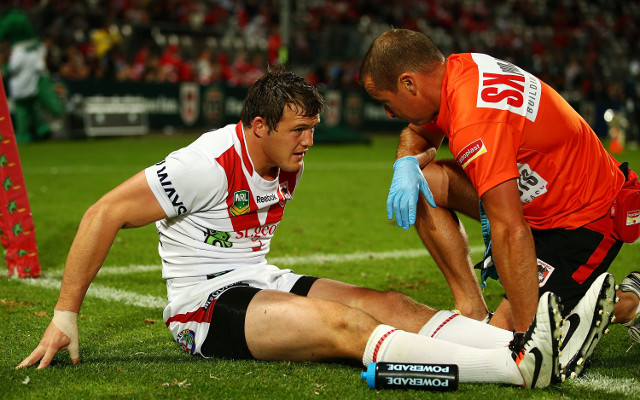 While Manly fullback Brett Stewart did not take the field in the second half, after a hip flexor injury saw him unable to run.

Both are expected to have scans on their injuries, and if they are serious,  it could throw a further spanner in the works of the New South Wales Origin side, as both Stewart and Morris were considered solid chances of places in the squad.

St George started the clash by placing themselves under pressure when a turnover 20 metres
saw the Sea Eagles shift the ball to their right, as Jamie Lyon slid over for the try.

Lyon added the extras to his own try and Manly lead by six after just four minutes.

Another incomplete set by the Dragons saw Manly winger Jorge Taufua cross in the corner, but the
decision was overruled due to obstruction.

Chase Stanley was guilty of two of the first three errors by the Dragons in the first eight
minutes of the game as he continued to struggle.

Daly Cherry-Evans sparked a line-break for Manly before a Daniel Vidot shoulder
charge gave the visitors an extra set of six. 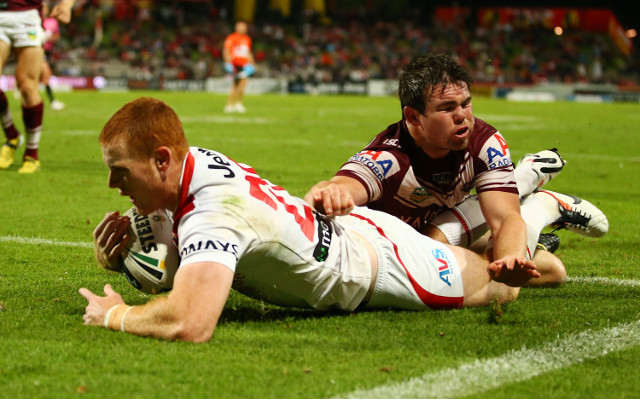 And David Williams gladly took the extra possession as he showed great strength to hit and spin across the line to make it 12-0.

Matt Ballin scored a soft try for Manly from dummy-half to stretch their lead to 18 and the game started to get out of hand for the Dragons.

St George could have opened their account  after having their fare share of possession at a time,
but they were unable to crack the Sea Eagles’ line.

Taufua was then put on report for a shoulder charge in the 27th minute for his hit on Jason Nightingale.

Manly’s ball retention started to go out the window with 10 minutes left in the half but their defence continued to dig them out of trouble.

Nathan Green finally broke through for the home side when the Dragons shifted the ball to their left to make it 18-6 at half-time.

Green scored his second soon after the resumption to make the contest with Soward missing the conversion to make it 18-8.

But there was no denying Michael Weyman as he smashed his way through the middle of the Manly defence as the gap was close to just four.

Chase Stanley scored the Dragons’ third try for the half in just 23 minutes to  see them draw level after Soward sprayed his conversion well wide.

Taufua showed tremendous strength to get across the line to score against the run of  play and Lyon added the extras to take the gap back out to six.

Despite have several excellent chances to make one last attacking raid, too often the Dragons took the wrong options late as they were left to wonder what might have been.