As well as checking on the progress of youngster Tiago Ilori, who is spending the remainder of the season on loan at Granada, Hunter wanted to look at Sociedad’s Antoine Griezmann closely, reports Spanish daily Sport. 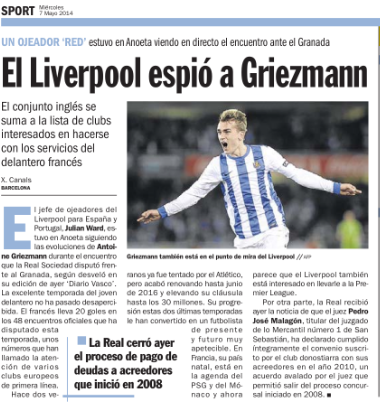 The 23-year-old has been a revelation this term, and although he did little during the 1-1 draw on Monday evening, his progress this season has been undeniable.

In 30 La Liga starts and six Champions League appearances, the Frenchman has scored 16 times, and managed to get forward and assist three goals as well.

As a result, he won his first cap for France earlier in the year, and he’s expected to be selected for the World Cup, as well.

He usually starts wide on the left, where he can cut inside and shoot on his right-foot, or beat the right-back on the outside. Like most modern wingers though, he prefers to cut inside, where he has the dribbling ability and quick feet to fashion himself shooting opportunities.

Griezmann has a buy-out clause of €30m, which while steep, will be within Liverpool’s transfer budget this summer. The Reds have enjoyed a brilliant Premier League campaign, but following their defeat to Chelsea last week, and their 3-3 draw with Crystal Palace this Monday just gone, it looks as though Manchester City will overtake them and secure the crown.

Versus Palace, Brendan Rodgers brought on Victor Moses from the bench, which shows much about Liverpool’s lack of strength in depth.

Griezmann would provide the squad much needed pace, technical ability, and enable Rodgers to rotate his brilliant attacking trio of Raheem Sterling, Luis Suarez and Daniel Sturridge. With Champions League football guaranteed for next season, this is vital – as it’s unlikely Liverpool will be so lucky with injuries next term.