Liverpool have been one of the Premier League’s busiest clubs in the transfer market so far this summer and, judging by the reports in today’s newspapers and around the internet, it seems that the Reds are set to keep their foot on the gas as Brendan Rodgers looks to piece together a strong squad for the 2015-16 season.

5. Liverpool have made their fourth signing of the offseason, with 18-year-old defender Joe Gomez completing his £3.5m move from Charlton Athletic by signing a five-year contract. 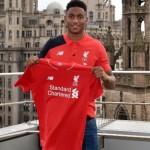