Becks proves what a class act he really is.

The 22-year-old has undoubtedly been the host nation’s star player in the tournament so far, but was rocked by the news over the weekend that he would have to miss the rest of the action after suffering from a broken vertebrae.

The Barcelona forward was clattered by Colombia’s Walter Zuniga during the second half of the quarter-final clash and there have even been reports that he lost the feeling in his legs immediately after the incident.

However, it has been reported that Neymar will be back within six weeks, and Becks sought to send his best wishes to the player by saying: “Very disappointed to no longer to see Neymar Jr playing at World Cup.

“Considering the pressure he has been under, he has been incredible. Get better soon and I know you will come back even stronger, força neymar.”

The post was accompanied by three wonderful pictures – one of which was taken recently, the second taken when Beckham was playing for MLS giants LA Galaxy, and the third when Brazil’s current national hero looks no more than 12 years old. 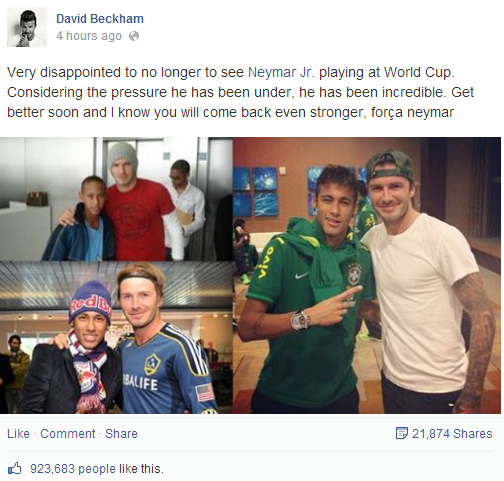