Cats make it 10 wins from as many games as they storm home to victory at MCG.

The Kennett curse has continued.

The Geelong Cats capped off their tenth win against the Hawthorn Hawks since the 2008 grand final, with an inspired performance in the second half seeing them get home 13.15 (93) to 12.14 (86) at the MCG.

In what is one of the great rivalries in the modern era, again the Hawks, and their former president Jeff Kennett were made to eat their words.

After the Hawks won the flag in 2008 against Geelong, Kennett said before the 2009 season that the Cats did not have the same “mental drive” as his side, and Hawthorn have been paying the price for his comments ever since.

However, Hawthorn were presented with the ideal chance to break the curse as they led by as much as 30 mid-way through the second quarter, only to see the Cats surge to an important early season win. 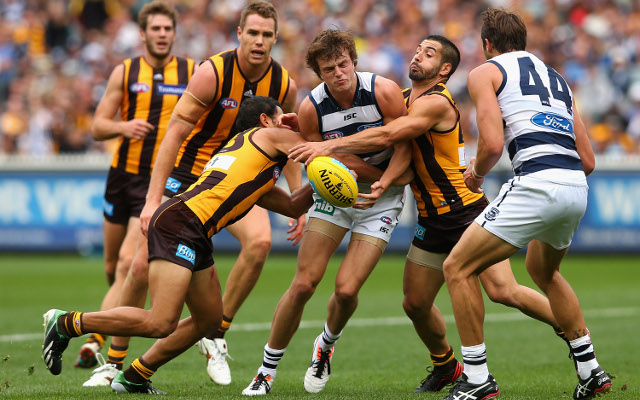 Ruck rover Joel Selwood was sensational for the victors, especially in the third quarter, in collecting 33 possessions and kicking a goal.

“Its a tough game and we really worked hard before it,we had a lot of young boys in the side so it was good,” Selwood said after the final siren.

“For us to be down by 30 points I think we were very lucky because they were playing well and we weren’t, but we can’t lapse like that in the future.”

Hawthorn coach Alistair Clarkson said the lack of run by the side in the second half cost them greatly as the Cats ripped away the ascendancy.

“We ere running not too bad in the last part of the game, but we fell away in the third quarter, we just couldn’t get the ball,” Clarkson said.

“We had so much energy for the contest and ran out of gas in the end probably.

“We haven’t got there this time but we’ll keep plugging away, but we will get there eventually (beat Geelong).”

Hawthorn applied relentless pressure at the ball for much of the first quarter and were rewarded with a 16-point lead, however, Lance Franklin sent a scare through the Hawks camp when he went into the dressing sheds before the break with a hamstring complaint.

The star forward returned to the field before the resumption and kicked truly soon after to stretch the Hawks’ lead to 24.

Both sides were a fraction wasteful in front of goal in the second term, but when Franklin assisted Issac Smith, the game looked to be getting away from Geelong with the lead at 30.

However, two important goals to the Cats before the long break gave them some momentum, when Tom Hawkins bent the ball through the middle from the forward pocket before Travis Varcoe converted to make the deficit only 20.

Hawks youngster Bradley Hill had 13 disposals in the first half, 10 of which came in the first quarter while Sam Mitchell ran the show for the Hawks thanks to nobody from Geelong tagging him.

The Cats got the early lift they needed in the third term when Mitch Duncan capatalised off the good lead up work by Selwood to cut the lead to 14.

Hawks came under fire in their back third as the Cats swarmed thanks to the shift in momentum with the side’s basic skills going out the window early.

Selwood found Tom Hawkins who kicked his second for the period and the margin was just one with Shane Savage scored a vital goal for the Hawks, their first in 26 minutes, after Geelong kicked the previous six

Geelong answered comprehensively when Andrew Mackie booted a massive goal from the centre square as the Cats continued to use their speed across the ground.

However, Hawthorn’s Jarryd Roughhead kicked a vital goal to cut the margin to just two to set up a grandstand finish. 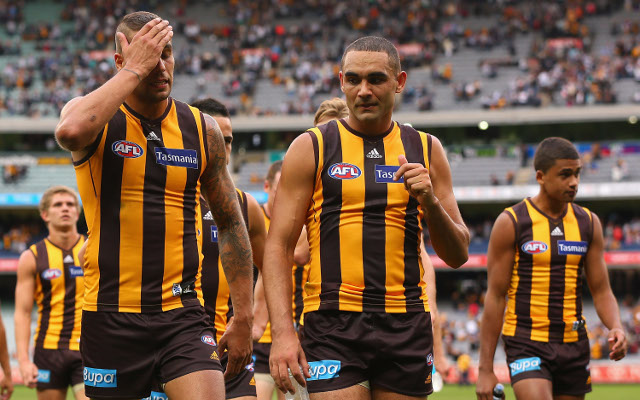 The last term did not start well for the Hawks with a terrible kick-in gifting a goal to Allen Christensen to make the margin 10, the biggest for the Cats all game

Billie Smedts failed to put a nail in the Hawks’ coffin with a sprayed shot on goal, but the margin was 15, and with Hawthorn kicking just two goals in a quarter and a half they would struggle.

The Hawks began to tire and were being forced to take desperate options to get the ball forward as quickly as possible, but an open goal for Shane Savage and enough time remained for a miracle with the margin at eight with three minutes remaining,

Luke Bruest could have set up a thrilling final few seconds, but his shot from 20 metres out sailed wide to seal yet another win for the Cats in their rivalry with the Hawks,