World Champions back in control after fine away win.

World Cup holders Spain retook control of qualifying Group I on Tuesday with a 1-0 win against France in Paris, Pedro Rodriguez scoring the only goal of the game in the second half at the Stade de France.

Pedro’s scrambled effort just before the hour mark was Spain’s reward for dominating possession and playing with assuredness despite coming into the game trailing France by two points at the top of the group.

The home team were always a threat going forward but could not find a way past Victor Valdes in the Spain goal and finished the game with 10 men after young midfielder Paul Pogba was sent off late on.

With just three matches left to play in Group I, Spain now lead France by a point, with only one team qualifying automatically for the finals in Brazil.

Coach Vicente Del Bosque welcomed Xavi Hernandez back into the Spain starting line-up after injury, and the Barcelona midfielder wore the captain’s armband in the continuing absence of regular skipper Iker Casillas.

Xabi Alonso, Pedro and left-back Nacho Monreal also came into a Spain team which showed a total of four changes from Friday’s surprise 1-1 draw at home to Finland.

Spain, playing all in red, should have taken the lead from their first attack, Monreal cutting the ball back for Xavi to blaze over from a glorious position inside the penalty box five minutes in.

Karim Benzema has come in for criticism for his recent poor form at international level, but he was not afraid to try his luck at the other end with a first-time attempt from Christophe Jallet’s cutback as France pressed.

Despite that opening, Spain soon settled into their rhythm, controlling possession and removing the sting from the game.

Chances followed, with Xavi firing rather tamely wide after being picked out by Xabi Alonso, before a Pedro shot was easily held by Hugo Lloris.

Then came a moment of real controversy on the half-hour mark, as Pedro went to ground under a challenge from Lloris as both players went for a through ball.

Hungarian referee Viktor Kassai waved away the vociferous Spanish appeals for a spot-kick as television replays suggested the Barcelona player was already going to ground before contact was made.

The visitors’ anger would have been even greater had they fallen behind seven minutes before the interval.

Mathieu Valbuena found Franck Ribery, whose first touch, with his head, took him clean through on goal, but Valdes won his duel with the Bayern Munich winger.

The game remained level at the interval, but Spain’s share of possession in the first-half was upwards of 75 percent, and the world champions did not have to wait too much longer to break through.

In the 58th minute, Monreal cut in from the left flank and drilled the ball across goal, with Pedro reacting quickest to divert it goalwards. A desperate Lloris got a touch, but just couldn’t stop the ball crossing the line and the little winger from Tenerife raced away to celebrate with the travelling fans.

France were now chasing the game, and Pedro came close to scoring again from substitute Jesus Navas’ centre soon after.

The home side, who came from behind to draw 1-1 in the reverse fixture in Madrid in October, remained a threat on the break, and Blaise Matuidi forced a save out of Valdes after being picked out by Ribery.

But their hopes of finding a way back into this match bit the dust when Pogba was dismissed with 12 minutes remaining. Having been booked just moments before, he was cautioned again for a studs-up tackle on Xavi. 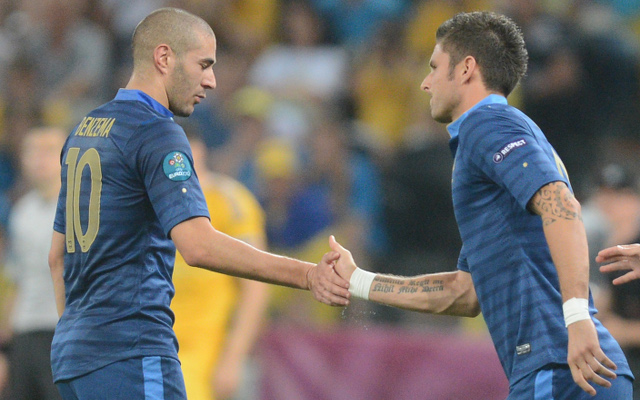