The sister of Manchester United and England legend David Beckham was duped into promoting an alleged gambling scam which has cost angry punters five-figure sums.

Joanne Beckham, 33, endorsed the scheme on Twitter back in May and has since been targeted on social media by some of the people left out of pocket.

Ms Beckham vouched for the scheme’s boss as as ‘very genuine’ and ‘trustworthy’, but she has since been the target of anger after said boss allegedly ‘vanished’ with investors’ cash.

There is no suggestion that Ms Beckham was involved in any wrongdoing, but that he not stopped former Chelsea striker Leon Knight demanding that she repay him the £50,000 that he lost on the scheme.

The Sun quotes one of Ms Beckham’s friends as saying: “She trusted this guy and feels as misled and wronged as everyone else. She is mortified by the allegations and is co-operating with the authorities.” 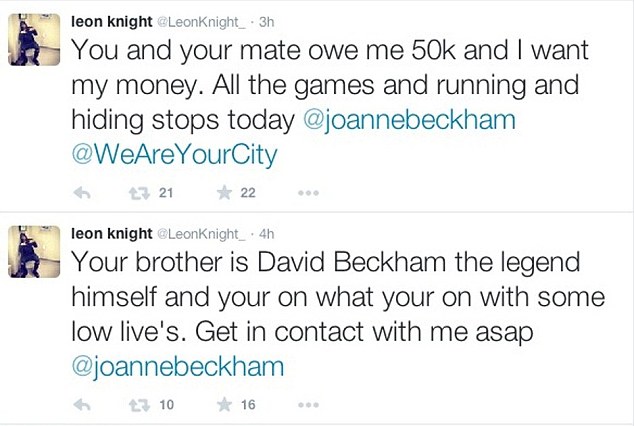