Do you think C. J. Anderson is happy to be the Broncos’ starting running back?

The Denver Broncos have announced that RB C.J. Anderson will enter training camp as the team’s starting RB when they report for OTAs.

At the NFL Annual Meeting in Phoenix, Arizona, Broncos head coach Gary Kubiak spoke glowingly about Anderson’s efforts in the 2014 season, but added that it isn’t set in stone and that Anderson will have to keep working at it.

“He made a big jump as a player, and I think he’s earned the right to walk in to the offseason program — the OTAs — and line up as our starter,” Gary Kubiak said, according to the Broncos’ team website. “But he’s got to continue to earn it on a daily basis… I think he’s shown he has all the ability to be an excellent starter in this league, so we’re really looking forward to working with him.”

An undrafted free agent out of Cal in 2013, Anderson emerged as a major force for the Broncos in the second half of the season when QB Peyton Manning started struggling. Anderson racked up 132.1 yards from scrimmage per game from Week 10 through the end of the regular season – only the Pittsburgh Steelers’ Le’Veon Bell had more – and Anderson’s eight rushing touchdowns and 10 total touchdowns led all running backs in that span. For his impressive efforts, Anderson was named to the Pro Bowl.

Anderson finished the 2014 season with 179 carries for 849 rushing yards and 8 TDs along with 34 receptions for 324 receiving yards. His 8 rushing TDs were eighth in the NFL and his 4.7 yards/carry were 10th overall and 7th among RBs. 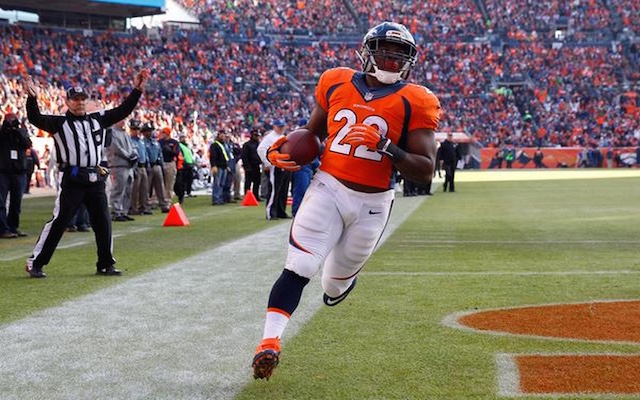