The DeflateGate report has been released, and it has some fairly damning evidence against Patriots QB Tom Brady.

The NFL’s investigator Ted Wells released his report today detailing the investigation into DeflateGate, and found circumstantial evidence that points to Tom Brady and several New England Patriots staffers being complicit in illegally deflating footballs in the 2015 AFC Championship Game against the Indianapolis Colts, but nothing conclusive.

“For the reasons described in this Report, and after a comprehensive investigation, we have concluded that, in connection with the AFC Championship Game, it is more probable than not that New England Patriots personnel participated in violations of the Playing Rules and were involved in a deliberate effort to circumvent the rules,” Wells concluded. “In particular, we have concluded that it is more probable than not that Jim McNally (the Officials Locker Room attendant for the Patriots) and John Jastremski (an equipment assistant for the Patriots) participated in a deliberate effort to release air from Patriots game balls after the balls were examined by the referee…

Based on the evidence, it also is our view that it is more probable than not that Tom Brady [the quarterback for the Patriots] was at least generally aware of the inappropriate activities of McNally and Jastremski involving the release of air from Patriots game balls.”

During the game, it was discovered that 11 out of the 12 game balls used by the New England Patriots were well beneath the minimum required inflation levels – an attribute that may have enabled QB Tom Brady to grip the ball better in a game that took place in cold, rainy conditions.

This exchange in a series of text messages between McNally and Jastermski was also featured in the report: 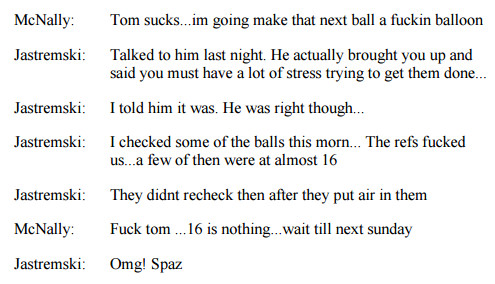 In the week’s leading up to the Super Bowl, Brady acknowledged that he prefers a ball with less psi (pounds/square inch) but vehemently denied having anything to do with the balls being deflated.