Hawks just pip the Kangroos in one of the games of the season so far.

Cyril Rioli hauled the Hawks off the canvas but was forced to watch team mates complete a courageous win.

Rioli kicked four goals and was Hawthorn’s shining light up forward in their 14.15 (99) to 13.18 (96) triumph at the MCG, but celebrations were tempered as Rioli suffered a hamstring injury late in the final quarter.

Lance Franklin had a rare off day in front of goal to kick just five behinds, in what was the first time he had been held goal-less since his side’s round five game against Sydney last year. 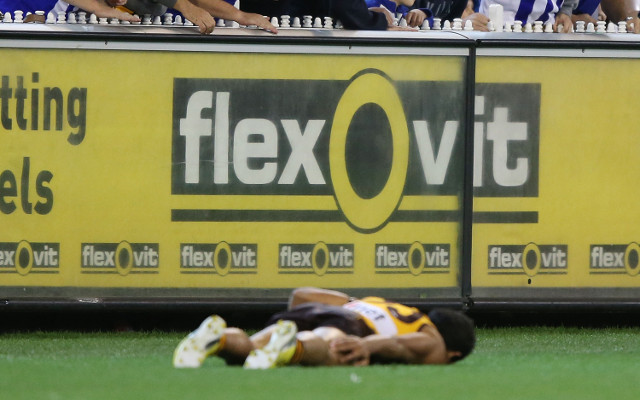 Andrew Swallow was inspirational for the Kangaroos with 35 disposals in a commanding midfield role while Lindsay Thomas kicked five goals to go with his six disposals.

Max Baily was also impressive for the Hawks in bagging three majors as Hawthorn won an important game where they were clearly not their best.

Despite impressive grit and determnation, the touch of class needed in tight games elluded the Kangaroos.

“Our ability to fight was really good, I’m proud of the players,” Kangaroos coach Brad Scott said after the game.

“Our midfield was really good, cleary one of the areas we need to work on is our polish.

“It’s easy to get despondent when you don’t get the rewards for your effort, but we’ll focus on what we’re doing well.”

Check out some of the highlights of the  clash below: