Wallabies miss chance to steal win at the death with heartbreaking penalty miss.

The British and Irish Lions have opened their three Test match series against the Wallabies with a heart-stopping 23-21 win at Suncorp Stadium.

Australia was rocked by a crippling injury toll that saw them reshuffle much of their backline as the home side also rued their wayward goal kicking in the loss.

The home side had a chance to steal the win at the death when the Wallabies forced a penalty from a scrum with substitute Kurtley Beale stepping up to take the shot.

However, the kick went sailing wide after Beale slipped, in what was a cruel way for the game to end for the brave Wallabies side.

Despite giving away penalties at the breakdown and being out-muscled in the scrum in the second half, the Lions deserved the victory as they take a vital 1-0 lead in the three-game series.

Wallabies captain James Horwill was left to wonder what might have been for his side.

“It was very disappointing and we were right in it at the end, we were a bit ill disciplined and some errors allowed them to get a leg up,” Horwill said.

“We didn’t have a lot of the ball in the first half but we managed to do pretty well with the ball we did have.

“Our set pieces were very good, we gave one early penalty, but as the game went on we really proved we can take it to them in the scrums.

“And we showed that right at the end to get that chance to win it.

“Melbourne is a must-win and we have to approach it that way, but we’re already looking forward to it.” 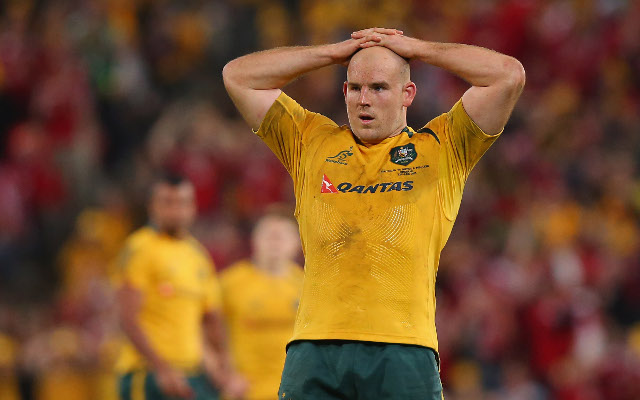 Lions skipper Sam Warburton breathed a sigh of relief after the clash and said his side will improve in a weeks time.

“That was entertaining that’s for sure, but it was way too close for comfort that last 20 minutes was tough but it was only half the job done,” Warburton said.

“They came out very quick and we expected that, we just had to try and weather the storm and get some points where we could.”

“It’s out of your control when the other team has a kick to win the game like that did.

“But it’s massive to get the win and get the ball and get momentum heading into the next week.” 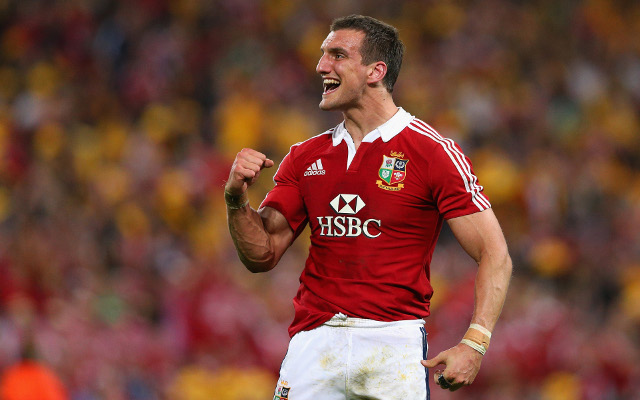 Lions coach Warren Gatland said some aspects of his side’s performance lived up to his standard while others will need to be worked on.

“It was a tough game in the first half we scrummed well and got solid ball from the lineout,” he said.

“But we gave away some soft penalties to let them back into it, I think we deserved to win
so we will take it.

The Lions were penalised for playing the ball off their feet, and Australia opted to go for goal, with James O’Connor just missing.

Again the Lions struggled with the rules at the ruck and were penalised for being off their feet at the breakdown, as O’Connor got the chance to slot a penalty from the same spot.

However, his chance missed to the left of the uprights in what were two golden chances missed for Australia to take the lead.

Off a penalty Will Genia took quick tap and he caught the Lions napping down the right wing, before a short grubber found Israel Falou who ran around and scored on his international debut. 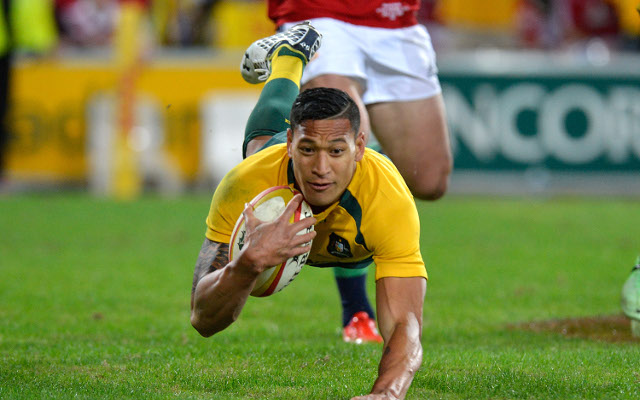 O’Connor finally slotted a shot on goal to give the Wallabies a 7-0 thanks to the brilliant counter-attack.

Australia were very solid around the ruck as they repealed the Lions that looked to  hammer the line one or two channels wide of the breakdown.

Leigh Halfpenny continued his excellent form with the boot on tour to slot a penalty in the 25th minute to narrow the Wallabies’ lead to four.

George North scored the Lions first try when he counter-attacked from a high kick, as he took advantage of the space in front of him created by the lack of defensive pressure, giving the Lions the lead. 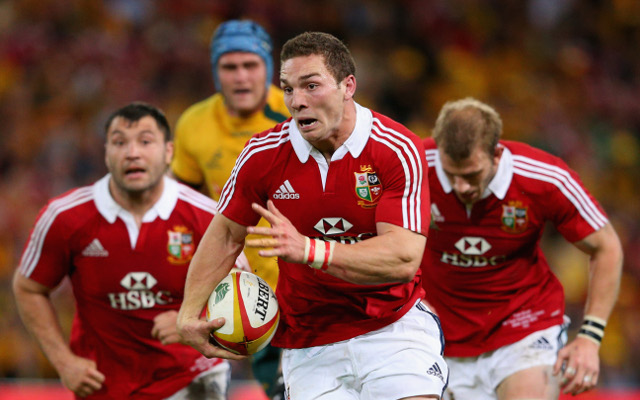 North went close to scoring again only to be denied by the sideline with the big winger’s left elbow just finding the sideline before the ball, thanks to the defence of Genia and Falou.

However, the tourists gained a consolation prize due to an advantage being played, with Halfpenny slotting the shot for goal to make the score 13-7 with eight minutes before the break.

Falou scored his second and the try of the game, as he stood up and stepped around three Lions’ defenders to put the Wallabies back on the front foot.

O’Connor’s bad night with the boot continued as he missed again with the Lions hanging on to their 13-12 lead.

Barnes was taken off but in his place came a handy replacement in the form of Kurtley Beale, forcing more changes to Robbie Deans’ side.

Australia breathed a sigh of relief when Halfpenny missed just his second shot for goal on the tour as the Lions took their one-point into the break.

After the break, Pat McCabe was taken from the field on a stretcher after a knock to his neck in a tackle, seeing flanker Michael Hooper being forced to line up at inside centre. 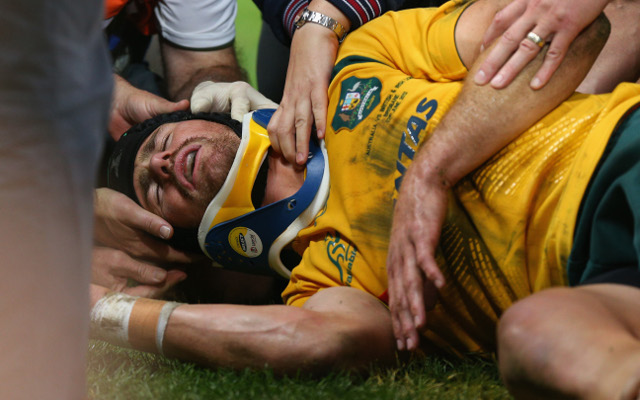 On the back of the reshuffle in the backline, Alex Cuthbert was put into a yawning gap,
as he scored a vital try to make the score 20-12 for the Lions.

However, If O’Connor had landed all of his shots for goal the score would be level and the game would take on a different look, despite the injury woes for the home side

But the young Wallabies playmaker redeemed himself soon after to make the margin five as the Wallabies stemmed some of the bleeding.

Penalties begin to mount against the Lions as ill-discipline crept into their game with Beale landing a shot from 48m out to cut the margin to just two with 18 minutes left.

The Wallabies were made to pay for being off-side at the breakdown, as Halfpenny gave his side back its five-point lead. 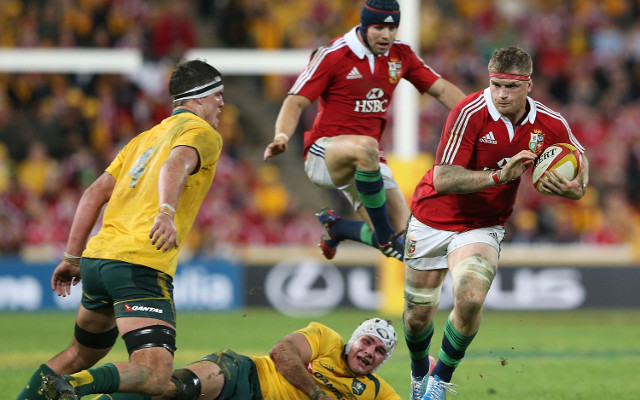 A sensational break by Beale led to the Lions being penalised for hanging on in the
tackle, as the Aussie super-sub finished the attacking play by potting the shot at goal to make it 23-21 with 12 minutes left.

The visitors again were penalised at the breakdown for playing the ball off their feet, one of many for the Lions.

Beale stepped up to take the penalty however his shot was out to the right of the posts and the Lions
hung on.

Adam Ashley Cooper with a possible dislocated shoulder played on for five minutes before being forced from the field with three minutes left leaving very few players on the Wallabies’ bench.

But Australia had one last chance for the win when their forwards earned a penalty from a scrum, only to see Beale miss the chance due to the slip, marring what had been an excellent second half cameo performance.