Senior Brisbane players believe the Broncos have confirmed their standing as premiership contenders after inflicting St George Illawarra’s first defeat to deny the Dragons the best start to a season in the joint venture club’s 15 year history.

Unbeaten going into the match at WIN Stadium, the Dragons were aiming to win the opening four rounds for the first time and also to secure a quadrella of consecutive wins for the first time under the coaching of Steve Price but while the home side’s attack was much improved on previous seasons their defence was fragile.

After surrendering a lead against premiers Sydney Roosters in the final minutes last year, the Broncos had too much hunger and ran out 36-20 in an entertaining match between two teams who had been largely written off before the start of the season.

For a team with the chance to create history, the Dragons started sluggishly and conceded two quick tries to Brisbane lock Matt Gillett within the opening 10 minutes. 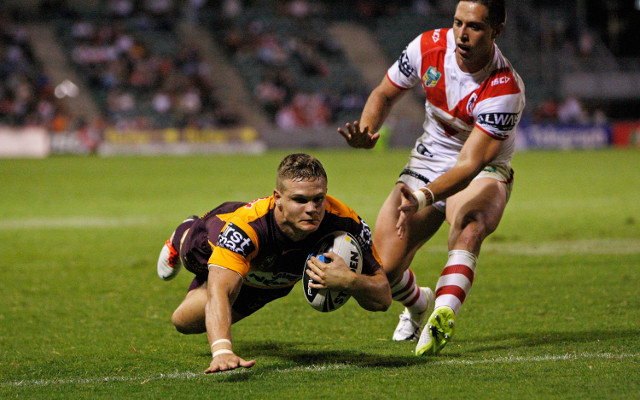 While the first was due to poor defence and players seeming too focused on Ben Barba, who put Dale Copley into space, the second came from an unfortunate bounce after a Gillett kick rebounded off the knee of St George Illawarra winger Brett Morris towards his own in-goal and the Broncos back-rower dived on it.

But the home side had no excuses for Brisbane’s third try, with Test forward Sam Thaiday simply running hard at the line from close range and forcing his way through three defenders, including Trent Merrin, in the 19th minute.

In between, Kiwis Test winger Jason Nightingale had crossed for his first try after outleaping Broncos opposite Daniel Vidot for a perfectly placed Sam Williams cross-field bomb and forced the ball down. 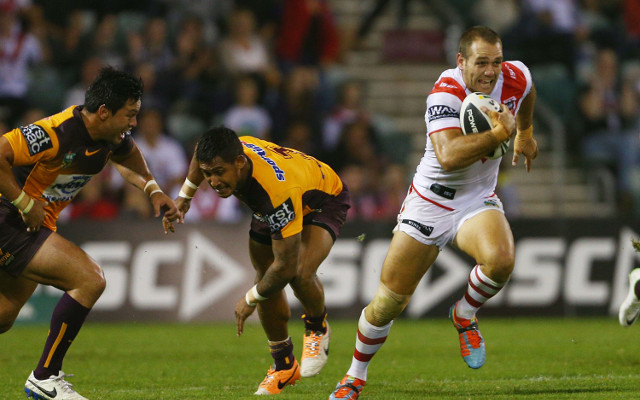 Morris scored the Dragons second try – and his sixth of the season so far – in the 27th minute and almost laid on a try for centre Gerard Beale when he batted back a Gareth Widdop kick only for the former Broncos star to fumble the ball diving across the tryline.

But there had been some worrying signs for St George Illawarra fans when Vidot had been allowed to run the ball back to nearly halfway after fielding a long kick 10 metres from his own line and he appeared set to score five minutes before halftime off a long pass from centre Jack Reed – only for the ex-Dragon to drop the ball with the line wide open.

St George Illawarra started the second half with renewed energy and were rewarded almost immediately when Nightingale dived on a kick from centre Dylan Farrell after he had burst into the clear in the opening set of tackles but their defence let them down.

A try by Brisbane interchange forward Todd Lowrie in the 45th minute highlighted the Dragons problems after he charged through the defence of skipper Ben Creagh and prop Mike Cooper and when Copley scored in the 60th minute their unbeaten start to the season appeared as good as over.

However, the St George Illawarra players refused to believe it and Beale scored the try of the match after finishing a movement that began when Adam Quinlan fielded a grubber kick near his own line and linked with Farrell, who the found Nightingale in support, before the Dragons fullback was eventually tackled over halfway.

St George Illawarra players spread the ball quickly to the other side of the field to create an overlap before Beale strolled over to reduce the deficit to 30-20 with 15 minutes remaining but Broncos halfback Ben Hunt sealed the win when he scored from a set play eight minutes later.