One of the best passers in college football, Marshall QB Rakeem Cato leads the Thundering Herd against Northern Illinois.

The Marshall Thundering Herd – winners of the Conference USA championship – take on the MAC champion Northern Illinois Huskies in the first ever Boca Raton Bowl.

After an 11-0 start the Thundering Herd led by star QB Rakeem Cato, Marshall was upset in OT by Western Kentucky in a 67-66 loss to lose out on a chance to be ranked or play in a major bowl game. Despite that heartbreaking loss Marshall won the Conference USA championship in a 26-23 win over Louisiana Tech. Marshall’s offense thanks to Cato has been almost unstoppable, scoring 40 points or more in 10 of their 13 games, and that defense has only allowed 20 points or more four times (going 3-1 in the process). The key to beating the Thundering Herd will be to keep Rakeem Cato off the field with long scoring drives.

The Huskies are riding a seven-game winning streak which includes their MAC Championship game win over Bowling Green. Much like Marshall, the Huskies have relied on their offense and efficient offense by QB Drew Hare, who has 30 total TDs running and passing and only two INTs. The Huskies have lacked consistency though and their level of offense and defense has seen its peaks and valleys throughout their winning streak.  The key to beating the Huskies will undoubtedly be to stopping Drew Hare and making big plays on offense.

Prediction: Marshall wins the Boca Raton Bowl – Rakeem Cato has run roughshod through the lower conferences of the NCAA, but he has a tendency to play very well even against the Power 5 Conference teams. Northern Illinois has a great offense and a great defense, but they don’t have the kind of firepower Rakeem Cato brings to the table. 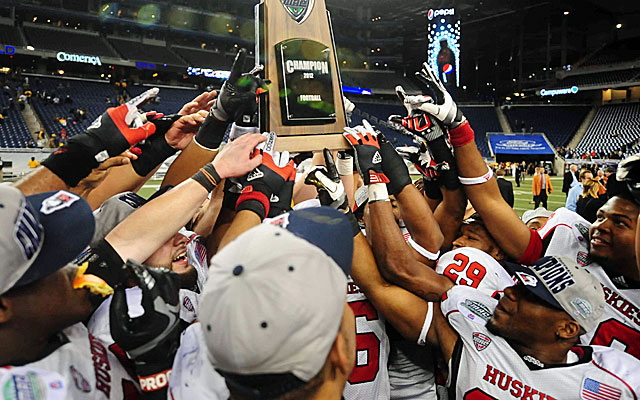