Ashes still on the line as played delayed by just half an hour.

Play between England and Australia is set to begin at 11.30 local time after both captains and umpires inspected the pitch at Old Trafford.

Michael Clarke has also declared before the start of play, meaning his men need 10 to stay alive in the Ashes, with the Three Lions facing a target of 332.

Images from the ground at Manchester earlier this morning showed ground staff trying to clear massive puddles off the covers and around the field. Play was scheduled to get under way at 10.00 (GMT), but was delayed as Australia try and stay in the game and the series. If the third Test is declared a draw, England will retain the Ashes thanks to their 2-0 lead in the five game series. Click here to hear what Matt Prior had to say about possibly winning the Ashes in a rain-shortened match. 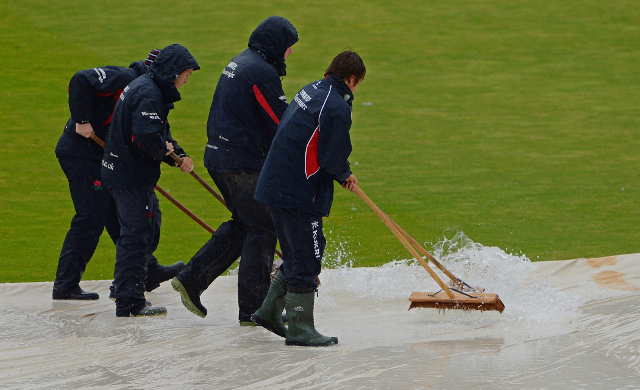 Just a bit of water being brushed off the covers! #Ashes pic.twitter.com/hqI9gxzJN4 — England Cricket (@ECB_cricket) August 5, 2013

Hang on, some cover movement. Rain stopped. Just to torture us… #Ashes pic.twitter.com/34PRADhAiY