Jack Wilshere has admitted that he plans talks with Arsene Wenger before the start of the season as he seeks assurances over his position at Arsenal.

SEE MORE: STAR Arsenal midfielder to hold CRUNCH talks with Wenger as he fears for future

The England international, who spend five months on the sidelines with a fresh ankle injury last term, faces huge competition to regain his place in the Gunners midfield.

Mesut Ozil and Alexis Sanchez seem to have the No. 10 position covered, while Francis Coquelin or returning captain Mikel Arteta are likely to be preferred in the holding role.

Here, fanatix has come up with five formations in which Wenger could accommodate Wilshere…

Okay, so let’s start by assuming that this is going to be Arsenal’s first-choice back five. Hector Bellerin impressed last season and Nacho Monreal has been linked with a move away. It is in midfield where Wenger has more options than he can shake a stick at.

His comments this week suggest that he is considering playing Wilshere on the wing. This system would see Mesut Ozil miss out, but the £42.5m buy should not be considered a sure thing based on recent form.

Both Ramsey and Wilshere, who has shown in recent appearances for club and country that he has an eye for goal, would be inclined to come inside and therefore the width must be provided by the full-backs. Theo Walcott would be an alternative on the right to add pace to the attack. 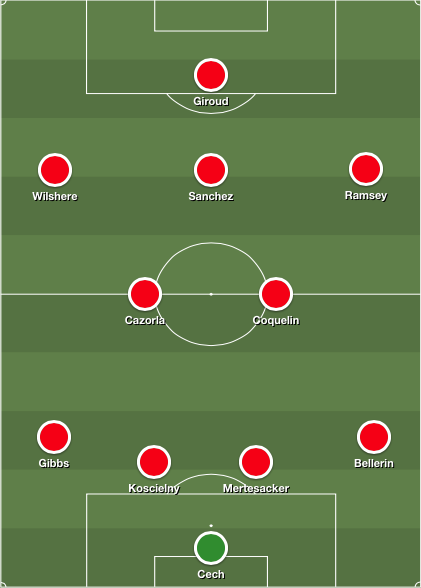