The BYU Cougars took a 23-0 lead in the first half over the Houston Cougars, but Houston rallied back and pulled within a 33-25 deficit before BYU held them off with a three-and-out.

No. 25 BYU played Houston on Thursday night, and they escaped with a 33-25 victory to improve to 3-0 after Houston put together a furious rally.

However, BYU responded with 10 unanswered points to take a 33-15 in the fourth quarter. Houston then pulled within an eight-point deficit with just over seven minutes remaining on another touchdown pass by O’Korn and a field goal by Kyle Bullard.

Houston had one more opportunity to tie the game, but BYU held them to a three-and-out when it counted and ran out the clock on the ensuing drive to seal the win.

BYU quarterback Taysom Hill threw two interceptions, but he still threw a touchdown and totaled 200 yards on 21-of-34 passing. The Heisman dark horse also added 160 rushing yards on 26 carries with a touchdown. Running back Jamaal Williams added 139 yards and two touchdowns on 28 carries.

For Houston, O’Korn threw for 307 yards and three touchdowns on 30-of-52 passing. However, the Houston running game was virtually nonexistent as Kenneth Farrow was held to seven yards on three carries, and the team rushed for 10 total yards. 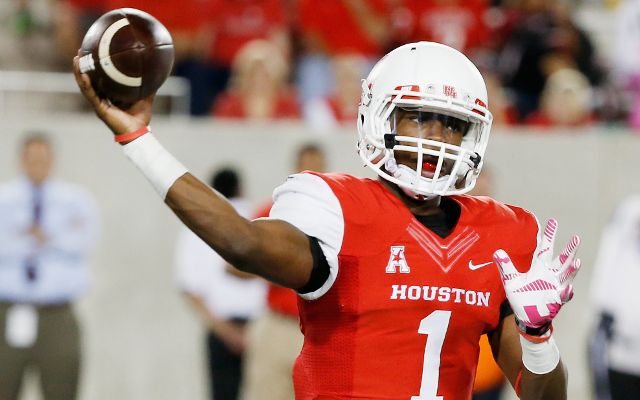