The midfielder could come back to the Emirates like a new player.

It is fair to say there were mixed feelings from Arsenal fans towards their club record £42.4m signing Mesut Ozil after his first season with the club in 2013/14.

After starting life in North London with a bang following his switch from Real Madrid, the 25-year-old’s form waned during the Christmas period and those autumn highs were never really found again.

However, despite the amount of criticism directed at Ozil during that time, most of it from the media was either overblown because of his hefty fee or hot air to try to create controversy.

The playmaker’s record of seven goals and 13 assists in 40 matches is hardly a poor return, and while more can certainly be done, the German is undoubtedly a fine player.

Ozil is also somebody who appears to thrive on confidence, as shown by the downbeat penalty he sent straight towards former Schalke 04 teammate Manuel Neuer during the Champions League last-16 first-leg against Bayer Munich.

Yet now on the international stage with Germany at the 2014 World Cup in Brazil and the attacking midfielder cuts a different figure, brimming with confidence and involved in everything positive the country is doing.

The Germans booked their place in a record eighth final on Tuesday night following the 7-1 trouncing of the hosts in a display of utmost efficiency and ruthlessness. No player completed more passes in the final third than Ozil with 27, and the Arsenal man’s ability to keep the ball in high areas of the pitch helps his team control games, and tire opposition players.

Whilst Ozil may not have grabbed the limelight like teammates Toni Kroos, Thomas Muller or Miroslav Klose, reports from the Daily Mail (since deleted) claiming the Gunners star was ineffectual was simply an example of creating a story for the sake of it. 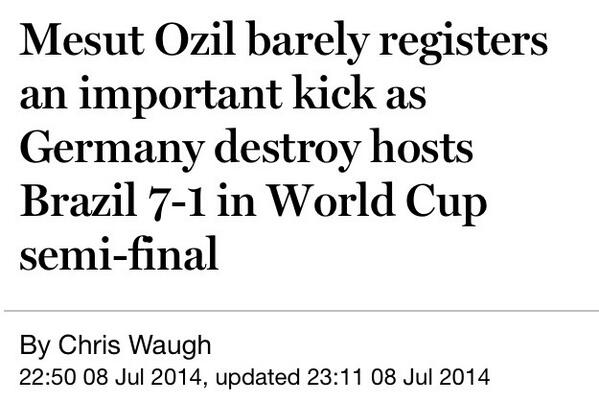 The midfield ace is not like the superstars of the modern game such as Lionel Messi and Cristiano Ronaldo, dazzling crowds and onlookers with their almost super-human ability.

Instead he is a true team player, a trait recognised by his current managers Arsene Wenger and Joachim Low as they continue to show faith when many supporters would like to drop him.

Following the result against the Brazilians, Low’s side are now the favourites to lift the World Cup trophy for a fourth time and that success would affirm Ozil as a world-class player – something which will benefit the North Londoners ahead of the upcoming 2014/15 campaign.