It’s over two decades since the now retired player donned a Red Devils jersey for the first time.

On September 23 1992, the 17-year-old David Beckham took to the field for the first time in a competitive match for the Englishman’s beloved Manchester United.

In the next decade Beckham would go onto achieve unprecedented success, some controversial moments and become one of the most recognised faces on the planet.

Having helped the now famous United youth team of 1992 to FA Cup glory, Beckham was handed the teenager’s first competitive call-up against Brighton in the League Cup.

The young midfielder would sign the player’s first professional contract with the club shortly afterwards.

After breaking into the United first team in 1992, Beckham had to wait two more years to net the Englishman’s first goal for the club.

The moment came in the recently re-titled Champions League against Turkish giants Galatasaray.

At the end of the 1995/96 season Beckham had returned from a loan spell at Preston North End the previous campaign to become an important part of Alex Ferguson’s side.

The midfielder secured the first of many Premier League titles that year, with two goals against Nottingham Forest a particular highlight.

In what has now become one of the most iconic moments in Premier League history, Beckham succeeded where Pele couldn’t and scored from the halfway line.

The goal against Wimbledon put the England international’s name on everyone’s lips and later in most of the tabloids.

In what became the most successful season in Red Devils history, Beckham and Andy Cole scored against Tottenham to secure the league title at Old Trafford for the first time since Matt Busby was manager.

The midfielder netted the equaliser in a 2-1 win.

The next step in United’s historic year was an FA Cup victory, which included a memorable semi-final in the FA Cup against rivals Arsenal.

The 2-1 win was most remembered for a brilliant solo effort from Ryan Giggs, but Beckham’s goal is harshly overlooked.

In typical Red Devils fashion the best was saved until last in 1999 and it was achieved in the most dramatic fashion thinkable.

After going one goal down to Bayern, United then scored twice in injury-time as first Teddy Sheringham and then Ole Gunnar Solskjaer got on the end of Beckham corners.

Beckham’s goal during a 7-1 hammering of West Ham United began a run of six goals in 10 matches for the midfielder and also helped United secure back-to-back titles.

Boot to the head and Real Madrid sale. 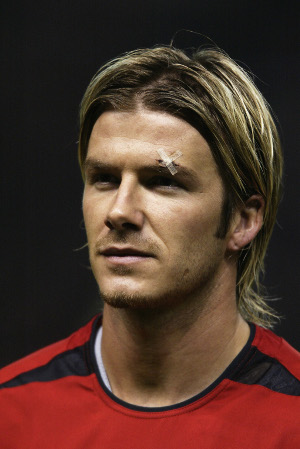 By 2003 things between Beckham and Ferguson had broken down at the Theatre of Dreams and the end was nigh.

A boot that was kicked by the manager after a defeat in the FA CUp hit the England captain above the eye and served as a metaphor for their relationship.

That summer the United love affair was over as Beckham was sold to Real Madrid.