Heat edge closer to booking their place in the NBA finals again.

LeBron James scored 16 of his 30 points in a pivotal third quarter on Thursday to lead the Miami Heat to a 90-79 victory over Indiana and to within one win of returning to the NBA finals.

The reigning NBA champion Heat took a 3-2 lead over the Pacers in the best-of-seven Eastern Conference finals.

The winner of the series will face Western Conference champion San Antonio in the league’s title series beginning June 6.

Trailing 44-40 at halftime, the Heat out-scored Indiana 30-13 in a third quarter that may prove to be the difference in what has been a close, physical and sometimes testy series.

Fittingly it was James, who recently collected the fourth regular-season Most Valuable Player award of his career, leading the charge.

He single-handedly out-scored the Pacers by three points and also handed out four assists of his six assists and grabbed four of his eight rebounds.

“He was tireless. He was making plays on both ends of the court, rebounding, covering so much ground defensively and making virtually every play for us offensively.

“It’s really remarkable and a testament to his conditioning and to his greatness — his ability to make big plays when you need them.” 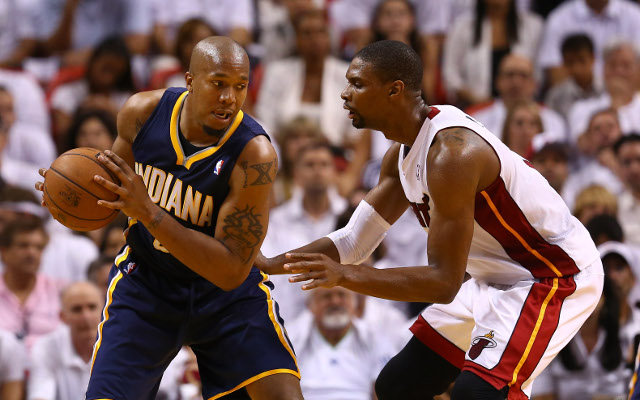 The Heat will try to finish off the Pacers in Indiana in game six on Saturday and return to the NBA finals for the third straight year.

Udonis Haslem delivered a key effort for Miami, scoring 16 points on 8-of-9 shooting. Mario Chalmers scored 12 for the Heat, who forced 18 turnovers to help make up for quiet offensive nights from Dwyane Wade and Chris Bosh, who combined for just 17 points on 6-of-14 shooting.

Haslem sparked Miami’s third-quarter charge with a dunk and finished a perfect 5-of-5 from the floor in the period.

Paul George scored 27 points with 11 rebounds and five assists to lead the Pacers.

“Our backs are up against the wall again,” said Pacers coach Frank Vogel, whose team fell in six games to the Heat in last year’s conference semi-finals.

Even if the Pacers win Saturday to force a game seven, they’ll have to return to Miami for the decider.

With the win, the Heat avoided the sort of desperate situation they faced last year, when they went down 2-3 to the Boston Celtics in the conference finals but won the last two games to reach the finals, where they beat Oklahoma City for the crown. 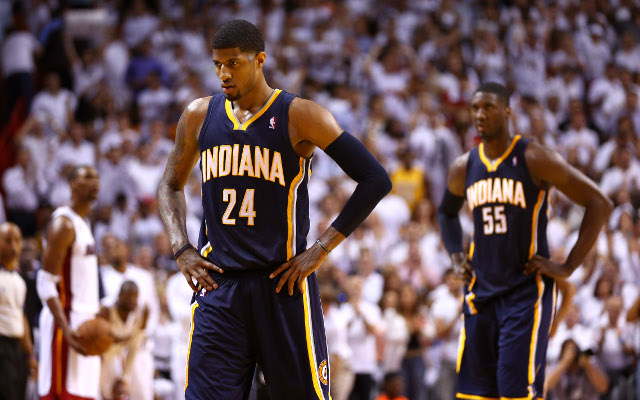 After connecting on 51 percent of their shots from the floor in the first half, the Pacers made just three field goals in the third quarter.

A basket by George gave them a 53-51 lead with 5:33 left in the third, but that was the last time they would lead.

The Heat scored 16 of the next 18 points, James scoring seven points in surge.

“I was just in attack mode in the third quarter,” said James, who also had some choice words for his teammates on their lack of urgency after the first half. “I looked for my shot and luckily I was able to make some.”

A three-pointer by George and a Tyler Hansbrough layup to start the fourth quarter saw the Pacers pull within 70-72, but that was as close as they would come in the final frame.

George and Roy Hibbert combined for all 23 of Indiana’s points in the first quarter, when the Pacers took a four-point lead.

Tempers flared in the second when Miami’s Chris Andersen lowered his shoulder into an unsuspecting Hansbrough, sending him to the floor. The two exchanged words and bumped chests before Andersen shoved the Indiana player, drawing a flagrant foul.