Organisers ramp up security but say the show will go on.

Sunday’s London Marathon will take place amid a climate of heightened security and increased vigilance following the fatal bomb attacks that plunged the Boston Marathon into tragedy.

The twin blasts that killed three and wounded more than 180 in Boston on Monday have prompted organisers of the London race to ramp up security measures in a bid to reassure runners and the half a million spectators expected to line the route.

Extra police will patrol the course, which snakes alongside the River Thames and passes iconic landmarks including Tower Bridge, the Houses of Parliament and Queen Elizabeth II’s Buckingham Palace residence, as well as the huge Canary Wharf business development.

With the perpetrators of the Boston carnage still at large, the British government has promised to take no shortcuts in its attempts to secure the safety of all those involved on Sunday.

“The London Marathon is a regular event. The organisers have a good record in terms of venue security, such as you can for an event that covers 26 miles,” Home Secretary Theresa May said.

“The police have looked at their arrangements. I believe they have made a number of adjustments to the arrangements that will be in place for the event.”

Fears of a serious incident have receded slightly after the funeral procession of former prime minister Margaret Thatcher through the streets of the British capital on Wednesday passed off without incident.

However, thoughts of the Boston horror will inevitably linger over the race, which will be preceded by a 30-second period of silence to remember the victims of the attacks.

Runners have also been encouraged to wear black ribbons, while organisers have announced that £2 ($3, 2.30 euros) for every finisher will be donated to a fund for victims of the Boston attacks.

Ethiopia’s Tiki Gelana, who won the women’s marathon at last year’s London Olympics, admits it has been difficult to focus her mind on the race after the devastating scenes in Boston.

“It is not so easy. As a human being, you feel sorry for the people affected because of what happened. You think about it now and then,” she said.

“But I am here to run, I am an athlete. You come to London and London is a big marathon to win.”

British Olympic star Mo Farah, who triumphed in the 5,000 metres and the 10,000 metres at the 2012 Games, will also be in action, although he will only complete half the course as he steps up preparations to compete at the full distance.

He said he had no doubts about competing despite the attacks in Boston.

“My support goes out to all the people involved, their families and loved ones,” he said.

“But they would want us to carry on and show our support. Why would you let it stop you?”

As well as the elite runners in the men’s, women’s and wheelchair events, the marathon will feature thousands of amateur competitors, many of whom will complete the 26.2-mile (42.2-kilometre) course to raise money for charity.

England cricket captain Andrew Strauss is running the race on behalf of cricket charity The Lord’s Taverners and he says those taking part will be sending out a message to the people responsible for the attacks in Boston.

“It’s a horrendous tragedy and I think this is an opportunity for all of us that are involved in the London Marathon to come out and do our bit and show a bit of solidarity and also show that we’re not going to cower with fear,” Strauss said.

“The world goes on and this is our opportunity to show in our own tiny little way that terrorism doesn’t work.” 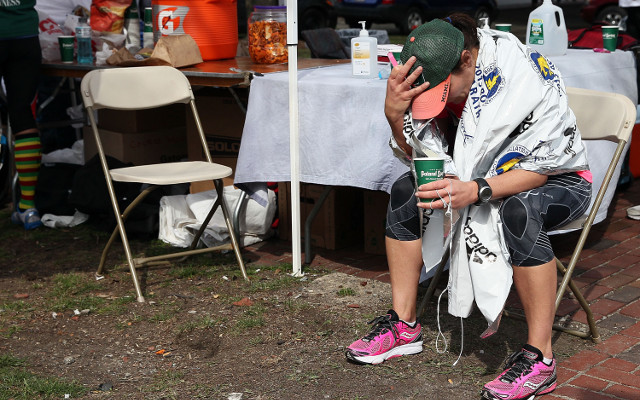