North Queensland nearly snatch the win at the death with last roll of the dice.

The Sydney Roosters have survived a late fightback by the North Queensland Cowboys to record their fifth NRL win in a row, beating the home side 12-8.

In what was at times a brutal contest, the Roosters made the most of their scoring chances while the Cowboys were their own worst enemies with the ball in hand.

However, the home side were just inches away from forcing the game to at least golden-point, when a Matt Bowen chip kick to Ashley Graham was not grounded cleanly as the full-time siren sounded in the background.

Roosters halfback Mitchell Pearce said the win was not one of their best but paid tribute to the tough conditions in North Queensland.

“We’ve had a big month with a few tough games so we did well to come up here and get the job done is very pleasing,” Pearce said

“It was really physical with the test front-rowers and the worlds best players in (Jonathan) Thurston, but the boys did really well to hang on.

“We have got a really good structure at the movement and everybody is doing their role and we are just clicking.”

Again the Cowboys looked a chance of going on with the job but they fell short with the loss their sixth of the season to see them well outside the top eight.

“We are in the game and we are competing, but with five or 10 (minutes) to go we have got time to play the sets out,” Cowboys centre Brent Tate said.

“I thought we were the better side for much of the game but we didn’t get the points.

“Our execution is not there, I’m not sure how much longer it’s going to go on for before the penny drops, but the effort is there by the side.” 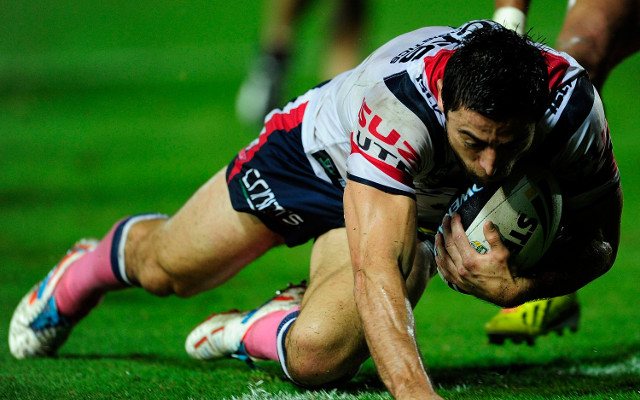 The Roosters were on the board first in the 23rd minute when fullback Anthony Minichiello crossed to see them jump out to a six-point lead.

North Queensland hit back in the shadows of half-time through Robert Lui, but Jonatahn Thurston failed with his conversion and the home side trailed 6-4 at the break.

Sydney started the second half in a hectic fashion with plenty of second-phase play helping them gain some easy metres.

North Queensland elected to take the shot at goal after the Roosters were caught inside the ten, as the home side drew level at 8-all in the 55th minute.

Thurston controlled the game well for the Cowboys as he steered traffic around the field well in the difficult, greasy conditions with rain falling for much of the clash.

The Roosters continued to heap pressure on themselves with penalties early in the tackle count giving the Cowboys even more chances to attack.

But off the back of another penalty, the Cowboys sensed a chance to put their noses in front as they took the lead for the  first time of the game at 8-6 after taking the points from right in front.

Mitchell Aubbuson then put the Roosters back in front after he ran a perfect line off a pass from Pearce to make the score 12-8. 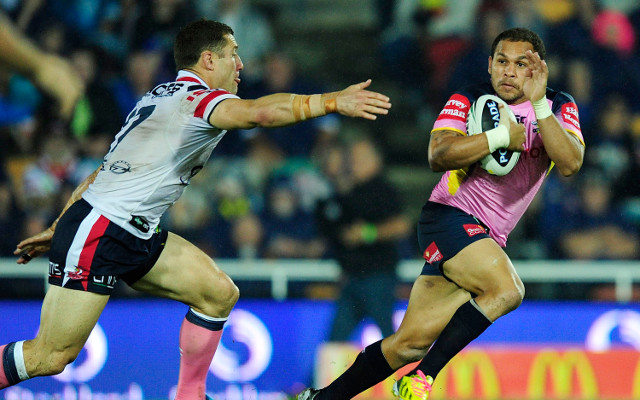 Cowboys hooker Ray Thompson put his side under massive pressure with less than 10 minutes left with a sloppy knock-on in a play-the-ball coming out of his own half.

As a result, an inside ball from Sonny Bill Williams to Minchiello who put a short kick through to a flying Roger Tuivasa-Sheck, who was unable to ground the bouncing ball in the wet conditions.

The no-try ruling kept the Cowboys in the game with just eight minutes left as they looked to overcome the four-point deficit.

North Queensland rushed several passes as they attempt to play catch-up football, but with the conditions continuing to favor conservative play, they were running out of time.

One last roll of the dice as time expired saw Bowen’s deft kick to the corner narrowly missed by Graham, despite his best efforts to sell the try to the referees.

The Roosters now have a blockbuster clash with the Melbourne Storm next weekend to look forward to, while the Cowboys will be keen to get back on the horse when they tackle the injury-ravaged Wests Tigers.