Tricolours prove they are the real deal this NRL season.

If Sydney Roosters fans had ideas of taking a holiday in September this year, they might want to rethink their plans.

The Trent Robinson-coached side has continued its impressive form to start the NRL season after thumping the St George Illawarra Dragons 34-10 at Allianz Stadium.

Despite losing the past five ANZAC Day clashes, the Roosters simply had too many weapons for their opponents to deal with, as their slick back-line again capitalised on the go-forward provided by their pack.

St George’s Ben Creagh said his side simply could not stop the Roosters’ momentum once they earned it.

“They were very good today, they have got quality all over the park, especially in the halves,” Creagh said. 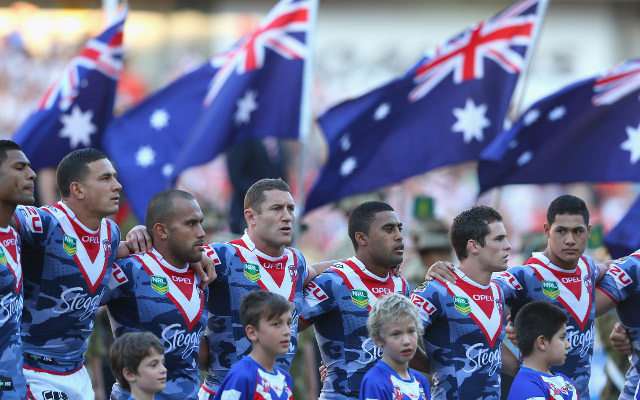 In front of a healthy crowd of 40,752, it was the Dragons who got on the board first when fullback Jason Nightingale pounced on a loose ball after a bomb, with the try withstanding scrutiny by the video ref.

St George’s try was the first time any side had scored first against the Rosters so far this year, in a nod to the tricolours’ goal-line defence.

Playing in his 100th NRL game, Jake Friend had a big hand to play in his side’s first try, as Mitchell Aubbusson celebrated his new deal with the club to sail through a yawning gap.

James Maloney continued the goal-kicking yips from both sides as he sprayed the conversion to level the game up at four-all. 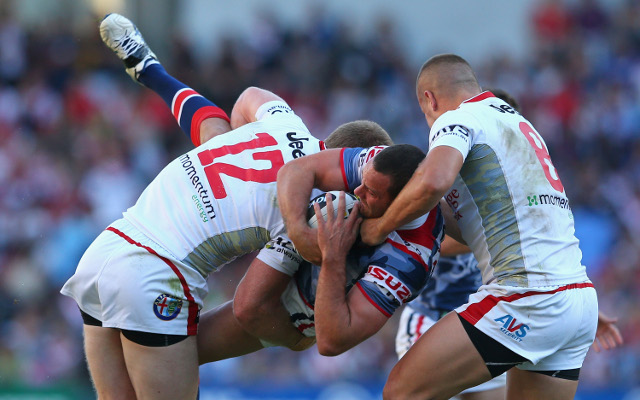 Sydney then grabbed the game by the scruff of the neck.

Michael Jennings showed why the Roosters chased him so hard, as he sliced through the Dragon’s line before blowing past Nightingale with a silky in-and-away run to score.

Sydney continued to show why they have been one of the competition’s front-runners, with second phase play by Sonny Bill Williams set up Anthony Minichiello to race 30 metres to make the score 16-4.

The Roosters’ discipline started to unravel and gave the Dragons excellent field position to hit back, thanks to three easy penalties.

However, St George’s halves were not able to create uncertainty in the Roosters’ defensive line with their options and running lines.

As a result the tricolours defence was been able to mark up well despite needing through plenty of work thanks to four sets in a row.

The lead grew to 18 when Martin Kennedy benefited from what was a forward pass by Daniel Mortimer, as the Roosters continued to run riot.

Sydney simply had too many options in attack, with Mitchell Pearce, Maloney, Williams, combining well with Jennings, Friend and Aubusson as the Roosters led 22-4 at the break. 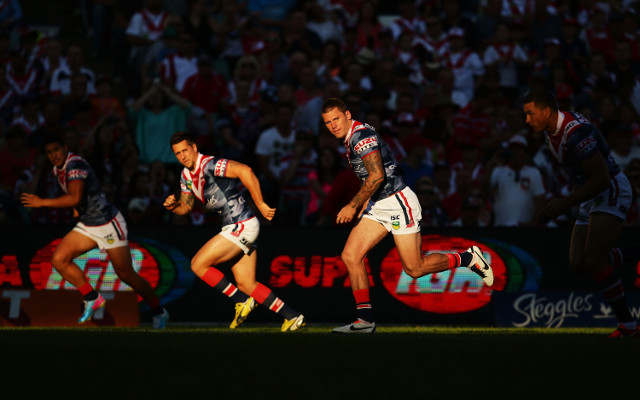 Star young winger Daniel Tupou scored for the Roosters after a clever kick from Maloney, to put a further dint in the Dragons’ chances of securing the comeback win, as they faced a 24-point deficit.

Jennings bagged his double in the 52nd minute when he swooped on a grubber kick as the home side continued to dish out the punishment on the scoreboard as the lead blow out to 30.

Trent Merrin placed on report for an unusual lifting tackle, but he should not have much of a case to answer for.

St George winger Brett Morris created a line-break through the middle of the ruck, but he butchered a chance for a try when the Roosters scrambling defence stole the football over the line.

But the Dragons did not have long to wait to recoup the lost try, as Matt Cooper easily grounded a kick to make it 34-10.

An incredible 68 minutes had passed between the two Dragons’ tries and both of them came from kicks, again testament to the Rosters goal-line defence, which has been one of the cornerstones of their early season success.

The Roosters’ win see them move into the top three of the NRL, having won four of their past five clashes as they prepare to face Penrith round eight.

St George will have to rebuild again after looking impressive in the last three weeks, as they prepare to face another title contender in 2013 next weekend in the form of Manly.