Tricolours continue their run of form to cruise to a 24-point win in the NRL.

A spray from Sydney Roosters coach Trent Robinson stirred his side from its first half slumber as they charged home to crush the Penrith Panthers 30-6 at Allianz Stadium.

Sydney were a fraction off the pace in the first 40 minutes as they failed to execute in attack as well as they have for much of the first two months of the NRL season.

However, the visiting Panthers did not take a backward step despite many of their big names still being on the sideline injured.

But the class and strike-power of the Roosters was on show in the second half, as they piled on 20 unanswered points to earn their sixth win of the year. 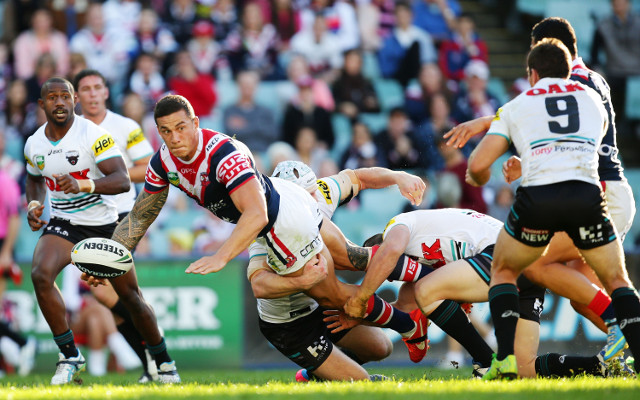 Jake Friend scored first for the Roosters after scooting out of dummy-half to convert significant pressure into points.

But in a blow for the home side prop Sam Moa helped from the field with medial ligament and did not return to the game.

Panthers fullback Matt Moylan continued his sensational start to his NRL career after touching down for a try, after the Roosters could not diffuse a bomb to even the scores at six.

Penrith did not take a backwards step through the first 20 minutes of the game, anddespite having less of the ball than the Roosters, they made the most of it.

However, the Roosters continued to show excellent discipline in defence to keep the Panthers at bay.

Penrith completed all but one of their 15 sets through the first half hour of the game, a big reason why they have been able to exert the pressure on the Roosters that they have. 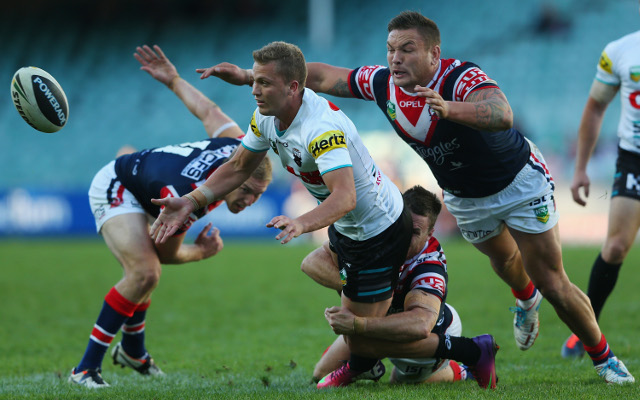 Sonny Bill Williams showed off his strength to reach out a metre despite there being a hint of
a double movement.

James Maloney missed the relatively easy conversion by his standards to leave the score
10-6.

Roosters have not managed to make the most of their scoring chances late in the first half
as the Sydney side lead by four at the break.

A Roosters 40-20 set the platform for Maloney to serve up an easy try for Michael Jennings  as he crossed against his former club.

Maloney slotted the conversion to give his side a 10-point lead with 28 minutes left.

Mistakes by the Panthers started to creep into their game and gave the Roosters too many chances to attack.

And against one of the more potent sides on offence they did not need to be asked twice
to put more points up on the board as Maloney slotted a penalty to make it 18-6. 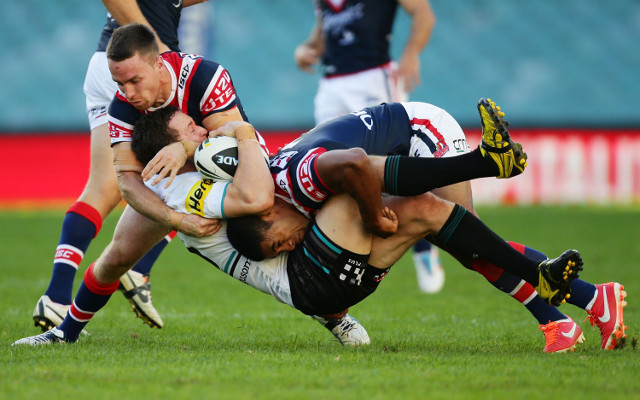 Jennings scored his second for the game and his sixth try for the season soon after, to all but secure
the two points for the Roosters at 24-6 in front.

Mitchell Pearce crossed underneath the posts off the back of a great pass by Jared Warea-Hargreaves to complete the rout.

The final score does not indicate how well the Panthers played for much of the game and they will look to regroup when they take on competition heavyweights the Melbourne Storm.

Sydney will be out to further secure their place in the top three when they lock horns with Manly, in what is looming as the game of the round.