France the next country in the South African’s sights.

The Springboks move on to Paris on a roll of two wins out of two from their November tour of Europe, and with their try-line yet to be breached.

Having succeeded in shutting out Wales on the try front in their 24-15 victory in Cardiff eight days previously, South Africa managed to prevent Scotland from scoring a single point in a clinically-executed 28-0 victory at Edinburgh’s Murrayfield on Sunday.

“The great thing for me is that we wanted to work harder on our defence. Last week was awesome; we didn’t give away any tries against Wales. And this week we didn’t give Scotland any points.

“I was very happy with that — especially at the end, when we were down to 14 men (replacement flanker Marcell Coetzee was in the sin-bin for the final 10 minutes).

“We had a back-line player on the scrum (centre Jaque Fourie).

“That’s what I like about this team. They don’t like giving points away. They put their bodies on the line. It was awesome defence.”

The Springboks effectively had victory in the bag at half-time. Tries from Willem Alberts, Willie le Roux and JP Pietersen, making his 50th Test appearance, plus three conversions from Patrick Lambie, put them 21-0 up at the interval.

A fourth try 13 minutes into the second half, scored by replacement prop Coenie Oosthuizen and converted by Lambie, completed the routine victory as Meyer’s charges looked ahead to their final tour match against France in Paris this Saturday.

There was, however, some collateral damage to the South African squad.

Tighthead prop Frans Malherbe limped off in the 33rd minute and is unlikely to feature against the French, whom the Springboks have not beaten away from home for 16 years.

“Frans has got a ripped cartilage,” Meyer reported. “We’re not sure if he’s going to be fine. The doctor will make a decision tomorrow (Monday) but at this stage we’re not very hopeful that he will be able to continue.”

Blindside flanker Francois Louw was stretchered from the field in a neck brace with four minutes remaining but Meyer said: “I’ve spoken to the doctor and it was precautionary. He’s injured his neck but he should be fine. We’re still monitoring him.”

On the subject of his squad’s form, having followed up their impressive second-place in the Rugby Championship with two clinical victories in Europe, Meyer commented: “I’m very proud of the guys and the way we’ve been playing. There are a lot of youngsters coming through and there’s a great blend. To have a 75 percent winning record this year is awesome. I’m very, very happy with our consistency.

“We’ve scored seven tries to nil on this tour so far. If we win next week, I think it will be an 80 percent win record for the year, which hasn’t happened a lot.

“But we have to keep our feet on ground and stay humble. I believe we’re on the right track but there’s still a long way for us to go.”

As for Scotland, they were left licking the wounds of their first blank on the scoreboard since a 40-0 Murrayfield defeat by New Zealand during the 2007 World Cup.

“We let ourselves down early on and put ourselves under a heap of pressure,” Scotland’s interim head coach, Scott Johnson, reflected.

“We were up against a clinical side who took all of their chances.” 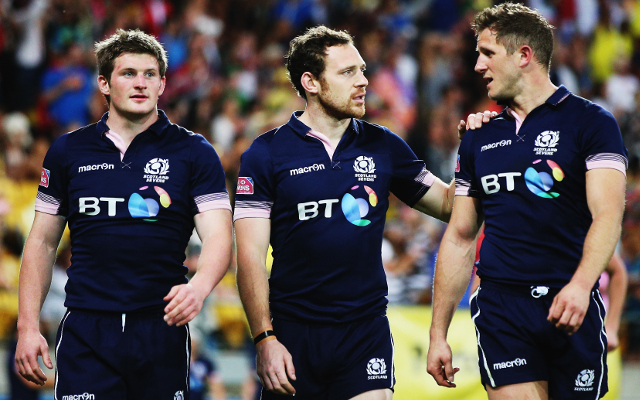