Thiago Silva would have been pleased to see the Englishman in a PSG shirt.

It has been a turbulent summer for Manchester United and Wayne Rooney, going right back to when the now retired Sir Alex Ferguson confirmed the forward had handed in a transfer request.

After that Chelsea became the front runners in the race to try and sign the 27-year-old and Jose Mourinho made it the 50-year-old’s mission to land Rooney.

“Chelsea FC can confirm that yesterday it made a written offer to Manchester United for the transfer of Wayne Rooney,” a statement from the west London club read at the time, as quoted by the Daily Mail.

New United boss David Moyes was dogged in the response however, with the club twice rejecting offers from the Blues for the striker and the Scot repeatedly stating the England international would not be leaving Old Trafford.

“We don’t want to sell Wayne,” was what Sky Sports quoted Moyes as saying and that was the manager’s stance throughout the whole saga.

Yet amid all this push and shove between the English club rivals, Thiago Silva of Paris Saint-Germain has revealed that the Brazilian was hopeful Rooney would come to France. 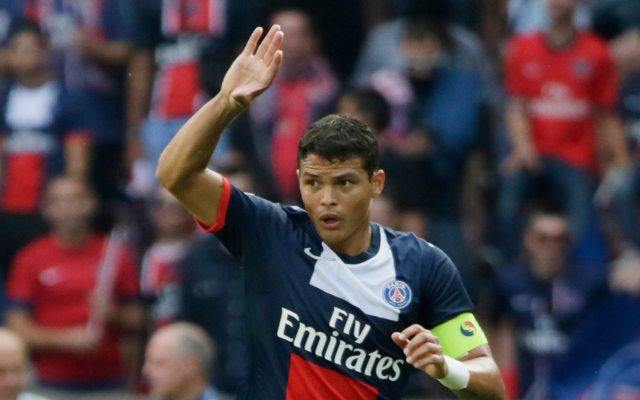 The Daily Express reported back in June that PSG would be in for the attacker, but when head coach Laurent Blanc rebuffed those claims things went quiet in Ligue 1.

“He is an amazing player, his qualities are well known by everyone. But in attack we are well supplied,”the former United defender was quoted by ESPN.

“We will rather look for players in midfield. If there should be another reinforcement, it should be in that position.”

Yet Silva – who cost the French champions £37m in the summer of 2012 – is rueful that Blanc never chased up the interest and brought Rooney to the Parc des Princes.

“Wayne Rooney would have been great to play with,” the Brazil international told the Guardian.

“He is one of the best strikers in the world and this is also a guy who has scored against me every time I’ve played him. That goal at the Maracana still irks me.”

As it is Moyes managed to convince Rooney to stay in Manchester – at least for a little while longer – and it seems the Englishman is going to be handed a new contract to sweeten the deal, according to the Metro.