Schalke have contested the validity of their Champions League last-16 match with Galatasaray, after the Turkish outfit included former Chelsea striker Didier Drogba in their line-up.

The first-leg match in Istanbul finished 1-1 but Schalke general manager Horst Heldt and finance director Peter Peters confirmed after the game they would lodge a complaint with UEFA.

“There are doubts about the validity of Didier Drogba to play in the Uefa Champions League”, the Royal Blues posted on their Facebook page.

“In order to preserve its right position, FC Schalke 04 will officially protest and ask Uefa to look into the matter. 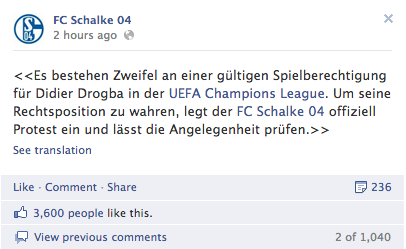 Galatasaray signed Drogba, 34, from Chinese side Shanghai Shenhua last month but the Super League have launched a lawsuit against the Turkish club, claiming they did not agree to sell the Ivorian who illegally broke the terms of his contract by moving to Turkey.

“Each club must itself ensure that his players are also eligible to play,” Peters is quoted as saying by German newspaper Der Westen.

“It would be negligent not to check the can,” added Heldt.

Arsenal to COMPLETE transfer of experienced French midfielder within 48 hours

Arsenal told to cough up £15m for World Cup stopper