WWE World Heavyweight Champion Brock Lesnar successfully defended his title with a win over Seth Rollins and John Cena in a Triple Threat World Title match at the Royal Rumble.

You don’t have to even like wrestling to have to respect the indomitable performance by Lesnar in that match.  John Cena and Seth Rollins, even with the help of outside interference from J&J Security, could barely make a dent in Lesnar as every signature and finishing maneuver they hit merely bounced off him.

Triple Threat rules meant no disqualifications and both John Cena and Seth Rollins emptied their mental banks to try and take out Lesnar. Cena hit no fewer than four Attitude Adjustments on The Beast, but never got better than a one-count. Seth Rollins inflicted multiple Curb Stomps on The Beast, but couldn’t keep The Champion down.

The scariest moment of the entire match came when Rollins jumped off the top turnbuckle onto a prone Lesnar laying on an announcer’s table – injuring Lesnar and causing WWE doctors to come out with a stretcher. The preliminary diagnosis for Lesnar was a broken rib and he lay on the ground barely moving for nearly 10 minutes.

With Rollins poised to win after getting a Curb Stomp on Cena, Lesnar somehow sprang to life and back into the ring, throwing out Cena and withstanding three shots from Rollins’ Money in the Bank briefcase before lifting Rollins up for an F-5 and the 1-2-3 to retain the WWE World Heavyweight Championship. 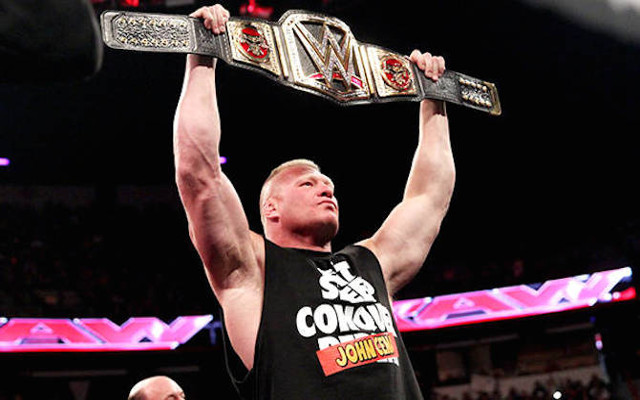