Sydney storm into top two in the NRL, despite being reduced to 12 men.

The Sydney Roosters have proven they are the real deal this NRL season after trumping the Manly Sea Eagles 16-4 in a scrappy contest at Brookvale Oval.

While it was far from the Roosters most clinical performance to date, they won the arm-wrestle against an equally disappointing Manly side.

However, the game was touched with controversy when Roosters prop Jared Waerea-Hargreaves was sent off for a swinging-arm tackle on George Rose in the 70th minute.

Despite the setback, the Roosters scored one last try to seal the win and see them and South Sydney in the top two places on the ladder for the first time since 1968. 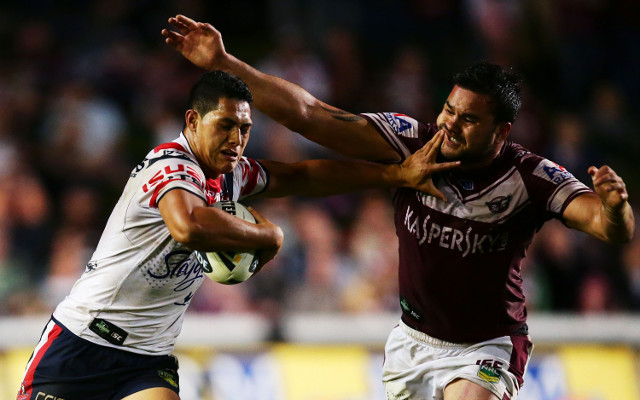 Roosters captain Anthony Minichiello said his side wanted to make a statement by knocking off another competition heavyweight.

“It was a great effort in a top effort by our boys in a very tough game to finish off,” Minichiello said.

“This year has been a mixture of a lot of things, we worked hard early in the pre-season, we just wanted to keep performing.”

When asked about Waerea-Hargreaves’ sending off, the Roosters skipper unsurprisingly leapt to his player’s defence.

“There has been a lot of those tackles like that this year so I think it was a bit of a harsh call,” he said.

Manly forward Anthony Watmough, whose 250th NRL game was soured by the loss, had a different take on the tackle.

“If it’s Steve Matai he gets sent, who knows what’s going on (with referees this year),” he said.

A dejected Watmough said his side were missing something as they had been getting close to stringing together wins, but coming up just short.

“That (loss) hurts, we do enough to keep ourselves in the game, but we should go on with it, it’s not good enough, we’re not completing and there are too many simple errors,” he said.

“We made some good busts and did well, there wasn’t much in the first half.

“It’s never enjoyable when you lose, I bleed maroon and white and I love all of the supporters for all of their support.” 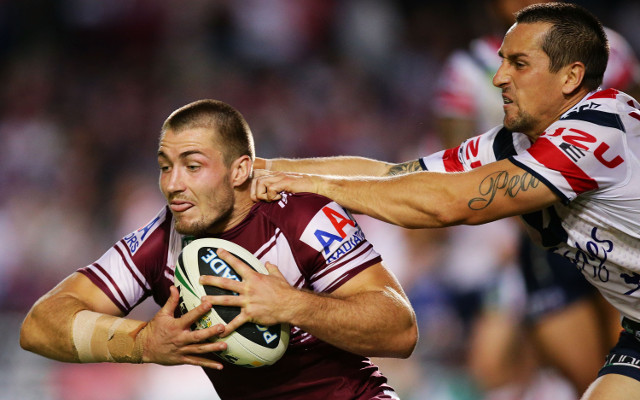 Manly were excellent early in getting up off their line and forcing the Roosters to kick from deep inside their own half early in the clash.

Sydney were on the board first after speedster Michael Jennings cleaned up a Manly mistake before racing 90 metres to score a sensational try.

James Maloney slotted the sideline conversion to make it 6-0 for the Roosters.

Amazingly the Roosters had made 11 tackle busts in as many minutes, but their poor handling often let them down.

Manly were noticeably missing fullback Brett Stewart in attack, with passes finding the deck when they would ordinarily be in his hands.

The Sea Eagles were camped in their attacking end of the field, but too often they rushed their decisions and took the wrong option, letting the Roosters off the hook. 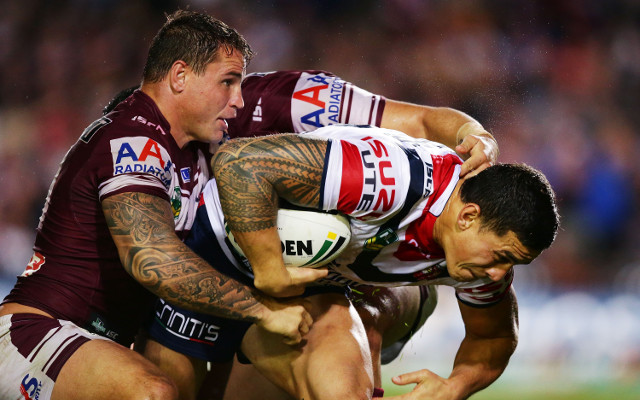 Off back-to-back penalties, Maloney slotted a penalty from right in front to give his side an eight-point lead.

Ball handling was well below par for both sides in the first half, especially two that were fighting for a dominant place in the top four.

Manly got back into the game in the 46th minute when Daly Cherry-Evans set up Steve Matai’s fifth try for the season to cut the margin back to just four.

All hell broke loose in the 70th minute when Waerea-Hargrreaves was sent off for his shot on Rose, in what is sure to be a talking point for the rest of the week and could set an interesting precedent at the judiciary.

Maloney slotted a penalty in the 75th minute to give the Roosters an important six-point lead,
meaning the home side needed to score twice to win in regulation time.

However, Roosters hooker Jake Friend sealed the game despite being a man down when he cleaned up a grubber kick.