Wests Tigers captain Robbie Farah and his relationship with coach Mick Potter has come under the spotlight after it was claimed the star hooker claimed he “can’t coach”.

Farah is said to have made the comment to former NRL player Gordon Tallis a year ago that Potter simply was not cut out for the job.

Amid speculation that Potter does not have the backing of the Wests Tigers board and could get the sack at any moment, Faraha’s comments do not paint a positive picture for what is going on behind-the-scenes at Concord.

Tallis, speaking on Triple M radio about the situation and Faraha’s comment to him a year ago said: Robbie Farah told me to my face – I don’t go on anybody else – when I was at Triple M last year on a Saturday show.

“He told me Mick Potter can’t coach.”I don’t go on Chinese whispers. My facts came out of his mouth.

“All I know is I want this team to finish as high up the ladder as possible and get as many wins as we can before the end of the season.

Asked if he knew who was behind the move to oust him, Potter declared: “I have my suspicions but I’d rather keep them to myself.

“Coaches get moved on and coaches stay and I’m hoping I’m one that stays.”I see a lot of momentum being built and I want to be part of it.”

Wests Tigers fans have reacted angrily to news of Potter’s apparent demise, flooding talkback radio and social media to speak of their ‘disgust’ at the board’s plans.

Click here to hear Potter’s response after Sunday’s game against the Dragons.

Robbie Farah denies he wants out of the Wests Tigers 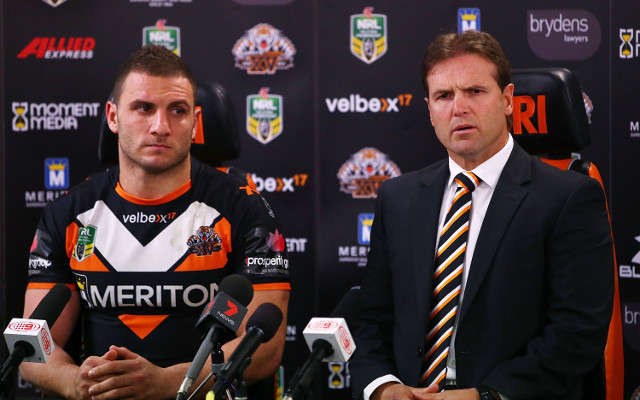