The Oakland Raiders have been rumored to be heading for many places, but it won’t be Los Angeles next year.

Despite a variety of NFL teams eager to move to a larger market, there are no NFL teams expected to announce a move to Los Angeles in 2015.

The San Diego Chargers announced earlier in the week that they are staying in San Diego next season, a clear sign that no one would be there next season. It’s likely that had the Chargers thought another team could move to America’s second largest market this year, they would’ve become players for a spot in the city. The St. Louis Rams and Oakland Raiders are believed to be the two others who are in a position to move.

The main sites that are believed to be in play for receiving an NFL team are Hollywood Park, where Rams owner Stan Kroenke now owns a stadium-sized portion of land; Carson, California, which has 172 acres that has been scouted by at least two NFL teams; and AEG’s site that would create a downtown stadium. Those spots have shown themselves to be the viable ones.

The Chargers made their statements earlier in the week, saying they’ll stay in San Diego in 2015 but noting, “Calendar year 2015 will constitute the team’s fourteenth year of work on a San Diego stadium solution.” The urgency was evident.

Raiders owner Mark Davis emphasized to me earlier in the week “all our energy is going towards trying to stay in Oakland,” and a one-year lease is their likely move now. Their lease for O.Co Coliseum runs out this year. 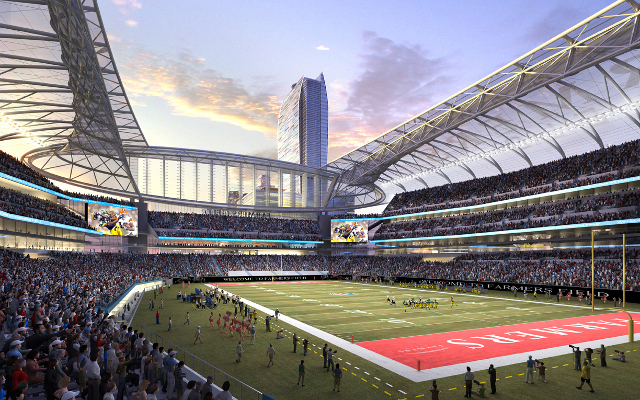