Liverpool have today confirmed that Jordan Henderson will succeed Steven Gerrard as the club’s captain.

The England midfielder has been deputy to Gerrard, who has left Merseyside for Los Angeles Galaxy after 17 years, for the last two campaigns and has stood in for the Anfield legend on 19 occasions.

And Henderson, who joined Liverpool from Sunderland for £16m in 2011, will now lead the Reds on a full-time basis. Here he is donning the armband… 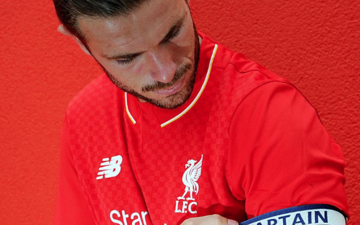 The 25-year-old told Liverpool’s official website: “I’m absolutely delighted and proud. It is a great honour and a huge privilege to be named as the captain of this football club.

“When Steven [Gerrard] wasn’t in the team last season, I tried to do the best I could when I stepped in and took the armband. Now I’ll be looking to carry that on and continue to grow as a captain.

“I’ll look to give my best all of the time, put the team firmly first and try to give them – or help them with – whatever they need from me.”

Manager Brendan Rodgers feels that Henderson is the perfect candidate to inherit the role from Gerrard, citing his commitment, professionalism and awareness of the club’s celebrated history.

He said: “Jordan is someone who leads through example – through his actions, attitude and application. He shows total commitment to the game and is a role model professional.

“He is also greatly respectful of the great traditions associated with being Liverpool captain and the responsibilities that come with it. He has been blessed to learn first-hand from one of the greatest the club has ever had, in Steven Gerrard.

“Jordan has grown as a person and as a player since arriving at Liverpool and is ready to take up this challenge. He will be his own person, with his own style of leadership and his own ideas and methods.”

Henderson has made 186 appearances for Liverpool, scoring 20 goals.