The Baggies tie up a loan move for Udinese striker Vydra. 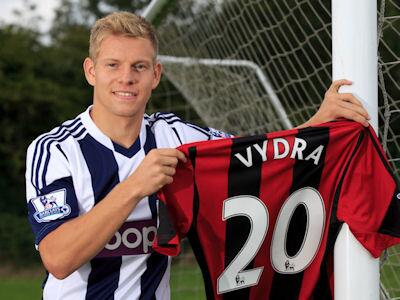 The Czech Republic international spent last term at Vicarage Road and scored 22 goals for the Hornets as they reached the play-off final.

Vydra’s 20 strikes in the Championship earned the 21-year-old the coveted Championship Player of the Year award and since then the striker has been linked with several Premier League clubs.

However, it is West Brom that have won the race and the Baggies can add the attacker to a forward line that also includes fellow new signing Nicolas Anelka.

Manager Steve Clarke was keen to quickly plug the gap left by Romelu Lukaku – with the Belgian having a superb season at the Hawthorns in 2012/13 before returning to Chelsea this summer – and it will be interesting to see if Vydra can make the step up.

“He had a really good year with Watford and we believe he’s got the qualities to score goals at a higher level. Hopefully, he’ll show that this year with us.

“I’ve said previously we’re a bit light in the forward areas and Matej will increase competition for places.”

Vydra is currently with the Czech national team ahead of their match with Hungary on Wednesday and to date the striker has earned seven caps for the country and scored two goals.

However, the forward will link-up with the new squad in Birmingham before the Baggies’ opening match of the new Premier League campaign with Southampton on Saturday.