Arsenal continued their fine record against Newcastle United on Saturday afternoon by scrapping to a 1-0 win on Tyneside – their eighth consecutive victory over the Magpies.

Gunners boss Arsene Wenger will have been pleased to see his side keep a second clean sheet in six days.

However, Arsenal’s inability to win by a bigger margin against Newcastle, who played for more than 80% of the match with just 10 men, will be a cause for concern.

Newcastle were reduced to 10 on 16 minutes when summer signing Aleksandar Mitrovic was shown a straight red card for an ugly tackle on Francis Coquelin.

Arsenal dominated possession with their numerical advantage, but they lacked a cutting edge and their only goal came on 52 minutes when Alex Oxlade-Chamberlain’s off-target shot was defected into his own net by Newcastle defender Fabriccio Coloccini.

Top Gunners blog All Arsenal have rated and slated Wenger’s players based on their individual performances against Newcastle.

Here is how All Arsenal scored everybody…

All Arsenal says: “The shot-stopper had almost nothing do, but remained alert to danger and claimed the simple balls required of him.”

All Arsenal says: “One of the bright sparks of the game, the Spaniard was one of the more impressive figures on the field. He was unlucky not to be awarded a penalty early on, and created a number of chances going forward.

“His pace was hugely important when Newcastle looked to counter, and should have had an assist or two throughout the game.”

All Arsenal says: “Another player who impressed from the full-back position, Monreal got forward well. He doesn’t offer as much of an attacking threat as Bellerin, but was solid throughout.”

All Arsenal says: “We looked so much more solid with the Frenchman back in the side, who could potentially have found a new centre-back partner in Gabriel.”

All Arsenal says: “The Brazilian was made to look a little average with Calum Chambers alongside him against Liverpool, but looked far more self assured next to Koscielny. His pace and ability to recover make us look far more secure when playing high up the pitch, and it was a solid, if uneventful, performance.” 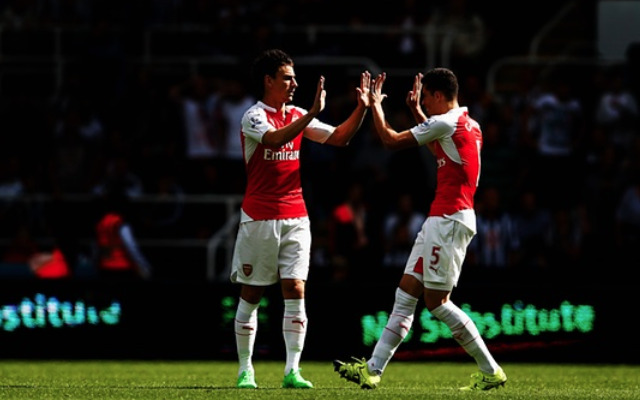