The former Barca coach wants Ozil at the Allianz Arena.

The former Barca boss is keen to put his own stamp on the Bayern squad after taking over from treble winning coach Jupp Heynckes in the summer and sees Ozil as the ideal acquisition.

It would see the attacking midfielder returning to his native Germany following three years at Madrid after a £15.8m move from Werder Bremen in 2010.

Despite Guardiola having been in charge of Los Blancos’ fierce Catalan rivals for four years, Ozil is a keen admirer of the Spaniard and has been linked with a move to Bayern ever since the 42-year-old announced he would be taking over. 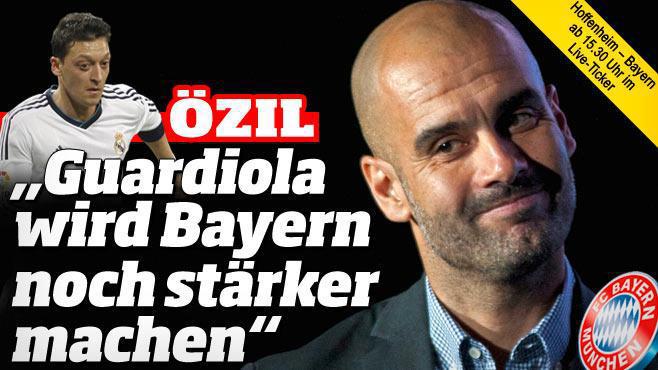 The quote from the German reads; “Bayern will be even stronger under Guardiola.”

Since making the move to the Santiago Bernabeu, Ozil has become an integral part of the Madrid setup and has made 158 appearances for the club, scoring 27 goals and providing 81 assists.

The 24-year-old is also a key component in a very talented German national side, with the midfielder having earned 46 caps to date and scoring 14 times.

It’s likely Bayern would have to sell in order to bring the Ozil to the club however, with Thomas Muller, Toni Kroos, Arjen Robben, Franck Ribery, Xherdan Shaqiri and new signing Mario Goetze all operating in the same positions as the midfielder can play in.

Shaqiri is the most likely of the group to depart the Bundesliga champions with Liverpool reportedly interested and although Ozil generally plays behind the striker, the Germany international is equally comfortable on either wing as well.