Golden State made the move to give them a reliable back-up to superstar Steph Curry at the one, as they look to continue to push towards a top four playoff spot in the back half of the season.

Blake said he was still coming to terms with the deal, as he changed out of his uniform and back intro street clothes, less than an hour before the Lakers’ game against the Houston Rockets on Wednesday night.

“I knew it could happen but didn’t expect it to happen, all at the same time.”

Brooks and Bazemore combine to make $2 million, meaning the trade will save the Lakers $4 million in salary and luxury tax implications. 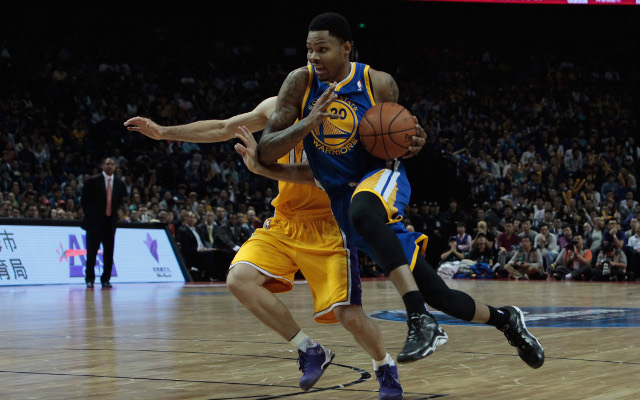 Blake, a 33-year-old veteran who has previously played for Washington, Portland twice, Milwaukee, Denver and the Clippers, was in a Lakers’ uniform for the past four seasons.

“The hardest thing is really for my family, really,” Blake said. “I got a wife, three little kids and now I’m going to have to spend four months, probably, away from them and so that’s going to be the hardest part.”

Golden State said they saw a handy point man in Blake who could help their team go further in the playoffs than last season.

“The acquisition of Steve Blake will provide us with additional veteran depth at point guard as we enter the stretch run of the season,” Warriors general manager Bob Myers said in a statement.

“He’s had a productive career and is a player who can both run an offense and has the ability to shoot the basketball. On the other hand, we thank Kent and MarShon for their contributions to our team both on and off the court and wish them success as they enter the next stage of their careers.”

However, the Warriors might lose their man just as quickly as they got him with Blake, who becomes an unrestricted free-agent after this season, said he would consider returning to the Lakers on a new deal.

“Absolutely,” Blake said. “I’ve loved my time here. When you spend (time) in some place this long, you start to get comfortable. We loved where we lived, loved the schools my kids were in and always loved the support of the fans and ownership and everybody. So, it’s one of the best places I’ve ever played at and if in the future they wanted me back, I would absolutely, definitely consider it.”

The other player most heavily mentioned from the Lakers is forward Jordan Hill, who still could be sent by the end of the trade period on Thursday night.