Enzo Perez could be set for Old Trafford switch…

The Red Devils are desperately crying out for improvements in that area, with Ryan Giggs retiring, Michael Carrick increasingly immobile, and doubts over the long-term suitability of Darren Fletcher, Tom Cleverley and last summer’s marquee signing Marouane Fellaini.

As a result, the likes of Bastian Schweinsteiger, Toni Kroos, William Carvalho and Kevin Strootman have been continuously linked, but now Benfica’s Argentina Enzo Perez has emerged as a target, according to Portuguese publication O Jogo. 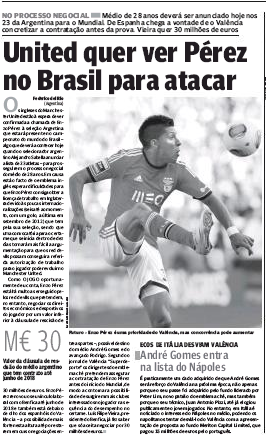 According to the report, Perez has a €30m release clause having signed a contract extension that ties him to the Portuguese champions until 2018, but United and a la Liga giant could be tempted to activate it.

Spanish club Valencia are also interested in his services, and could have the funds to meet the clause as they are now bankrolled by Singaporean Billionaire Peter Lim.

The 28-year-old played a key role in Benfica’s title triumph last term, acting as a deep-lying playmaker at the base of the midfield. He can pass the ball both short and long – and has the skill on the ball to retain it even in the tightest areas. While he isn’t especially creative, the fact he can tick over possession so ruthlessly tires out opposing defenders and midfielders.

Perez made 40 appearances in all competitions last season, scoring four times, assisting two more goals and picking up ten yellow cards. His pass completion was a very impressive 85%, while he completed just under two tackles per match.

United fans can expect a closer look at their potential new recruit this summer at the World Cup with Argentina. Perez is likely to make Alejandro Sabella’s final 23, although we probably won’t be seeing him in the starting XI, with Javier Mascherano and Ever Banega preferred in central midfield.