While neighbours Man United floundered in the transfer market, Manchester City backed new boss Manuel Pellegrini with a hefty kitty that must have irked the Chilean’s predecessor Roberto Mancini. The scarf-loving Italian blamed his failure to retain the title on the board’s unwillingness to spend last summer but Pellegrini can make no such complaint after City splashed £91m on new additions, with only Tottenham, flushed from Gareth Bale’s departure, spending more.

Pellegrini acted quickly and efficiently to address the frailties in his squad, ensuring a relaxing August for the Sky Blues while rivals United and Arsenal scrabbled for last minute deals. The 59-year-old, who joined from Malaga in June, also continued to offload the handsomely paid deadwood still on the club’s books (Wayne Bridge, we’re looking at you).

Brazilian Fernandinho arrived in early June from Shakhtar Donetsk but, while the box-to-box midfielder will add a potent attacking threat and defensive solidarity to Pellegrini’s side, at £30m he appears overpriced for a 28-year-old.

‘Little Fernando’ is expected to form an imposing and dynamic partnership with Yaya Toure in the centre of park and Citizens fans will not miss the reliable but wooden Gareth Barry, who joined Everton in a season-long loan deal on deadline day.

Sevilla pair Jesus Navas and Alvaro Negredo also arrived before the start of August for a combined £35m. The former is a traditional winger who has already troubled Premier League full-backs with his pace and directness. Mancini, who identified the right flank as in need of strengthening last summer, must have regarded Navas’ arrival with dismay: he ended up with Scott Sinclair, who joined West Brom on loan after a dismal debut season at Eastlands.

Powerful finisher Negredo was joined up front by Stevan Jovetic, a versatile forward who can play a number of positions and will add creativity and goals to City. It remains to be seen if the duo prove an upgrade on Mario Balotelli and Carlos Tevez but it would take some troublemaking of extraordinary proportions for Negredo and Jovetic to be as problematic to Pellegrini as the absent Argentine and erratic Italian were to Mancini. The new head-coach will face a battle to keep all his forwards happy, however, with Edin Dzeko and Sergio Aguero also vying for two spots up front. 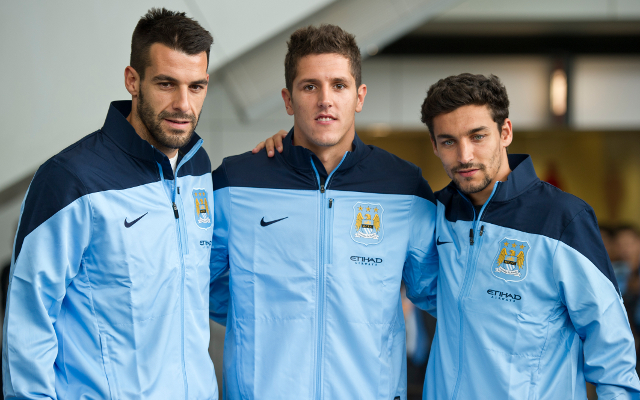 Finally, centre half Martin Demichelis arrived from Atletico Madrid on transfer deadline day to cover injuries to captain Vincent Kompany and Micah Richards. The sluggish Argentine, 32, is the one new boy who may struggle to adapt to the pace of the Premier League but he is likely to behind the rejuvenated Joleon Lescott and Matija Nastasic, as well as Kompany, in the pecking order.

With Joe Hart suffering from the curse (or the pressure) of being England’s number one, City might have dipped into the transfer market for a new goalkeeper but like Roy Hodgson, Pellegrini has shown faith in Hart and decided against further destabilising the 26-year-old.

Nit-pickers will argue City also lack quality down the left flank and sufficient cover at centre half if Kompany’s recovery takes longer than expected.

But overall, Pellegrini has inherited a squad full of winners and added yet more proven performers during the window. Much will depend on how the former Real Madrid head-coach adapts to the intensity of the Premier League where, unlike La Liga, there are no easy games. A strong showing in the Champions League, in which Mancini performed woefully, is also essential but there seems little doubt that the mega-rich club will challenge for top honours this season.