A Philippe Coutinho wondergoal rescued a new-look Liverpool and gave the Reds a 1-0 win over Stoke City in an otherwise uneventful opening-weekend match at the Britannia Stadium.

The Brazilian playmaker broke 86 minutes of deadlock with a rasping 25-yard strike to ensure that the Reds started the new Premier League season with three points.

Here, fanatix rates and slates the performances of Brendan Rodgers’ side…

The Belgian was confident coming for crosses and accurate with his long-ball distribution to Christian Benteke. He also made a couple of decent saves in a very solid opening-day outing.

Did not have an awful lot to do defensively as Ibrahim Afellay preferred to drift inside off the Stoke left. Only got forward on a couple of occasions as he eased his way into Liverpool life.

Mame Biram Diouf was a nuisance for the Slovakian and Dejan Lovren all game. Liverpool’s centre-back pair managed to nullify him in the end, but were lucky that he did not have more support up front.

Fortunate to stay on the pitch when his elbow on Diouf was only punished by a yellow card, but leaves the Potteries with a morale-boosting clean sheet after his debut-season struggles for Liverpool. 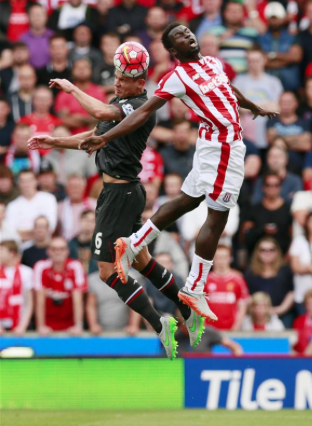 The 18-year-old was very assured on his Premier League bow. If anything, his confidence was nearly his undoing as he overplayed a couple of times, when a more experienced player would have kept it simple.