Chelsea began their title defence against Swansea City on Satuday, although the Pensioners appeared to have lost a lot of the swagger and conviction that made them such accomplished champions last term.

The Blues looked like they were still in pre-season form and could only manage a 2-2 draw with the Welsh outfit. Having taken the lead through Oscar, they were pinned back by debutant Andre Ayew, only for a Federico Fernandez own goal on 30 minutes to restore the home side’s lead.

However, the game’s decisive moment came ten minutes after the break when goalkeeper Thibaut Courtois was dismissed for bringing down Bafetimbi Gomis. The French striker finished calmly from the spot, and ten-men Chelsea were unable to find a third.

Here’s how Jose Mourinho’s men rated against the Swans…

Much busier than he would have expected; Courtois coped well under plenty of Swansea pressure in the first half, but he was deservedly sent off seven minutes into the second period for a clumsy tackle on Gomis.

The former Stoke City goalie did not impress in his debut, and was unable to stop Gomis’s penalty, which ultimately proved decisive. With Courtois certain to face a ban, Begovic will get his chance to impress over the coming matches.

Ivanovic was troubled by Jefferson Montero throughout and failed to find the net when presented with a gilt-edged opportunity by a Cesc Fabregas free kick.

Cahill put on an overall solid performance, and provided one critical stop to prevent Gomis from getting a sniff at goal. 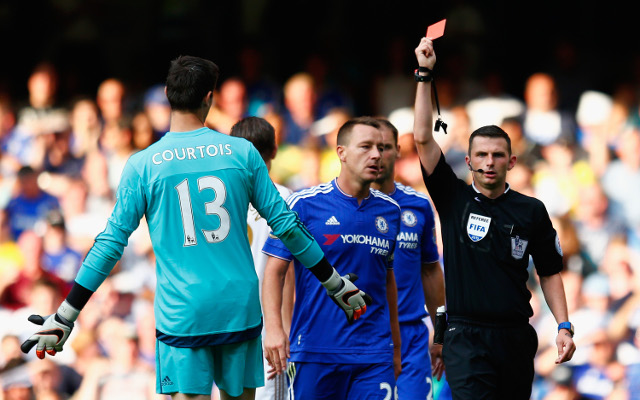