Sturridge and Rodgers reap the rewards after a great start to the season.

The Premier League Player and Manager of the Month awards have been announced with Liverpool taking both prizes, as Daniel Sturridge and Brendan Rodgers emerge victorious. 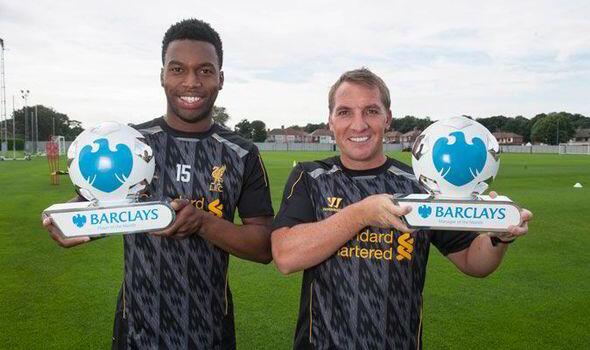 A superb start to the 2013/14 season has seen the Reds play three league matches and win all three, remaining as the only side in the division with a 100% record and not to have conceded a goal.

All of the games so far have finished with Rodgers’ men as 1-0 victors and Sturridge has netted all of the club’s strikes as well.

The Merseyside outfit started the term with triumph against Stoke City, followed up by Aston Villa and Manchester United wins.

Another player from the club, new goalkeeper Simon Mignolet, was also on the four-man shortlist for the award after saving a penalty against Stoke and having yet to let a goal in.

The other two stars were Christian Benteke of Aston Villa – who like Sturridge has three league strikes so far – and Everton full-back Seamus Coleman.

However, August certainly belonged to Rodgers and the Northern Irishman’s team and it seems justified that the 40-year-old and the club’s star striker pick up the gongs.

The side’s next match is on Monday when the team face a tricky away fixture at the manager’s former club Swansea City.

Since an opening day defeat at the hands of United and then a 1-0 loss to Tottenham Hotspur, the Swans then secured victory over West Bromwich Albion and qualified for the Europa League and look in good form.