French publication L’Equipe have run a feature today, which includes Chelsea duo Eden Hazard and David Luiz in a potential PSG starting XI ahead of next season.

The report claims PSG are readying a €60m bid for Chelsea’s Belgian winger, while they are keeping tabs on David Luiz, who is also interesting Spanish giants Barcelona.

Hazard was arguably Chelsea’s best player last term, notching 17 goals in all, but David Luiz struggled to get into the side in his favoured central defensive position.

After Jose Mourinho fell out with Hazard towards of the end of the campaign though, both the stars could potentially be on their way out of Stamford Bridge. 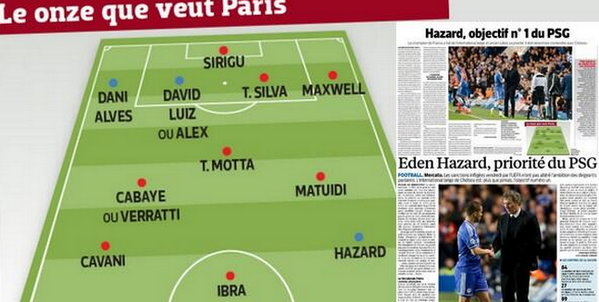