Reigning playoff MVP Jonathan Quick made 25 saves as the defending champion Los Angeles Kings advanced to the NHL playoff semi-finals Tuesday with a 2-1 win over the San Jose Sharks.

Right wing Justin Williams scored both Los Angeles goals and Quick made several key stops down the stretch as the Kings held on in the deciding game to win the Western Conference playoff series four games to three.

“I felt like I could have had three or four goals tonight. I had quite a few opportunities but I will take the two,” Williams said.

After a scoreless first period, Williams busted through with two goals in three minutes for Los Angeles, who won their first Stanley Cup championship a year ago behind the brilliant goaltending of all-star Quick who picked up the 2012 Conn Smythe Trophy as the MVP of the Stanley Cup finals.

“We couldn’t get one extra past Quick, that’s probably what it was,” Sharks coach Todd McLellan said. “They got a power-play goal that we didn’t get. The second one they got was when we had overextended a shift and they took advantage. So in the end we probably made one more mistake than they did.”

Heading into game seven, the home team had won every game in this evenly matched all-California series and the fifth seeded Kings kept that streak alive Tuesday in front of a crowd of 18,593 at Staples Center arena.

Los Angeles claimed games one, two and five, while San Jose grabbed games three and four at the Shark Tank arena before levelling the series at 3-3 with a 2-1 win at home on Sunday.

The 31-year-old Williams scored two times in the second period Tuesday before Dan Boyle finally beat Quick at the 5:26 mark of the third period.

Quick closed the door after that, making one superb stop after another, including a brilliant glove save off Sharks forward Joe Pavelski from in close late in the third.

“Toughest loss of my life tonight,” said San Jose’s TJ Galiardi. “We left it all out there but it hurts to be eliminated.”

The Kings are now 4-4 in franchise history in game sevens. The last time they played in one was in 2002 when Colorado beat them four games to none to take the opening-round series. The Sharks are 5-3 all-time in game sevens.

“They are as good as us. It was a low-scoring series, just crazy,” said Kings’ coach Darryl Sutter.

Los Angeles is now a perfect 7-0 at home in the post-season and have won 14 consecutive games at Staples Center where their last loss was to the Vancouver Canucks on March 23.

The Kings next face the winner of a quarter-final series between Chicago and Detroit. That series is also going seven games with the deciding game set for Wednesday night.

“Both Detroit and Chicago are going to be very challenging. We have a lot to prepare for,” Quick said. 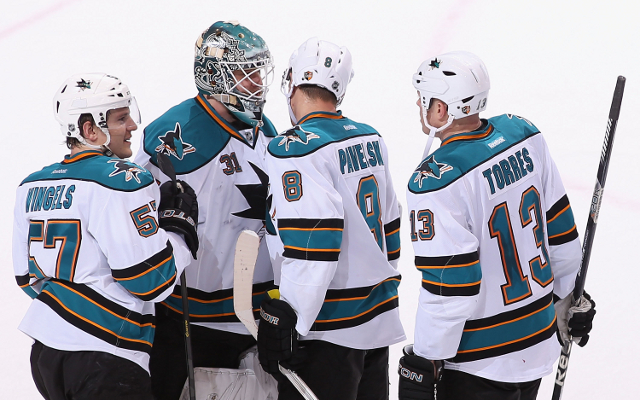