The Kansas City Chiefs once again ended their season with Chase Daniel starting at quarterback in Week 17 against the San Diego Chargers.

While last season ended in a win, a 9-7 record still wasn’t enough to propel the Chiefs into the playoffs as opposed to 2013.

Smith has helped turn the Chiefs into a winning team since they finished with a league-worst 2-14 record in 2012 along with head coach Andy Reid.

Chiefs owner Clark Hunt said that he looks at this quarterback-coach combination as a Super Bowl-winning one.

“We’ve got a quarterback and coach who can take us to the Super Bowl,” Hunt said to the Kansas City Star.

The Chiefs have not won a playoff game since 1993, which was when Hall of Fame quarterback Joe Montana led them to the AFC Championship.

The team’s playoff win drought seemed to over in the 2014 playoffs, but they blew a 28-point lead and lost to the Indianapolis Colts.

Pro Football Talk reported on the Chiefs’ confidence in Smith and Reid on Twitter. 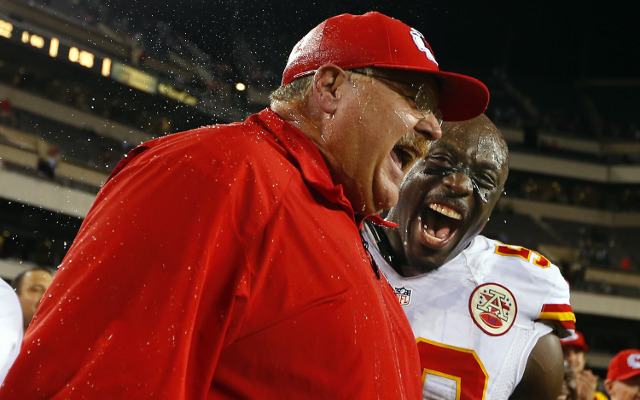 (Video) Kansas City Chiefs quarterback fakes a handoff to no one