The Socceroo performed well as the Eagles were beaten by Tottenham on their top-flight return.

If this is a sign of things to come from Mile Jedinak, then the Premier League has a new cult hero on their hands.

Despite captaining Crystal Palace to a narrow 1-0 defeat at the hands of big-spending Tottenham on their top-flight return, Jedinak can hold his head up high following an accomplished and industrious display on his debut in England’s top division and was unfortunate not to pinch the Man of the Match award.

Jedinak paraded his influence in the Palace engine room (as shown by the graphic below from the Four Four Two stats zone) throughout the game and demonstrated his defensive credentials by achieving a tackle success rate of 66%, more ball recoveries (9) than anyone on the field, three interceptions – the most of any Palace player – and winning 100% of his aerial duels (2/2). 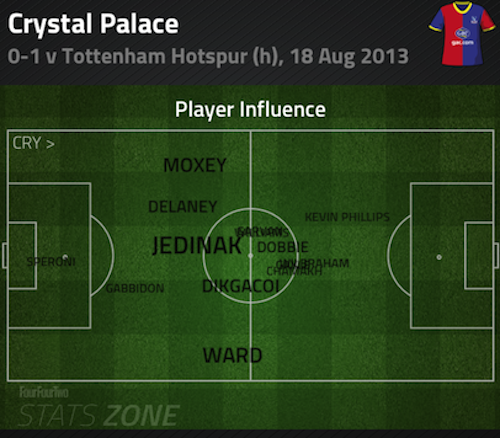 Although the 29-year-old’s contributions in the final third were restricted he carried off his role as the fulcrum of Palace’s midfield without a hitch, giving his attacking team-mates a platform to play from and ended the match with a 75% pass completion rate (40/53) – bettered only by four opposition players including Paulinho and fellow new-boy Nacer Chadli.

Just surviving is the minimum requirement for Ian Holloway’s side this season – something that haven’t managed in each of their last four Premier League campaigns – and it’s without doubt Jedinak’s leadership will go a long way to achieving that goal.