Newcomer to number 10 jersey not able to put his stamp on first Test match.

The pressure is on James O’Connor to hold on to the fly-half spot after what coach Robbie Deans said was a “difficult night” for him in the Wallabies’ heart-breaking 23-21 first Test loss to the British and Irish Lions on Saturday.

Replacement Kurtley Beale missed a penalty in the dying seconds and the Lions hung on to win the Brisbane Test and move to the verge of a long-awaited series win.

While the Wallabies were counting the cost of their defeat with a lengthy injury toll to be assessed, O’Connor’s position at number 10 looks shaky for next weekend’s Melbourne Test after a mixed night.

O’Connor was barely sighted for much of the opening half, was hesitant in attack at times and compounded his woes with only two successes from five shots at goal in the Wallabies’ tense two-point loss.

Coach Robbie Deans’s decision to prefer O’Connor at number 10 and pass over incumbent Quade Cooper in his squad has had its share of critics and now comes a week of soul-searching as the Wallabies try to keep the series alive to a Sydney decider on July 6.

Asked after the match for his assessment of O’Connor’s performance at fly-half, Deans said: “It was a difficult night for James… but he was at the heart of putting ourselves in a position to win the game so he probably deserves credit for that under the circumstance.”

O’Connor said he was happy with his effort, although admitting that things did not go the Wallabies’ way and the home side had three players stretchered off with injuries during the match.

“I was pretty happy with it. I didn’t have too many touches, a few more would have been ideal,” said O’Connor, who was only playing his second Test at fly-half for Australia.

The 22-year-old played in his 38th international on Saturday but his only appearance at number 10 was his last Test appearance in a 24-18 win over Warren Gatland’s Wales in 2011.

“I think we played the game we wanted to and it was just a few things that didn’t go our way.”

With Deans unlikely to recall the out-of-favour Cooper after overlooking the 38-Test playmaker for his 31-man squad, Beale’s fly-half chances have improved after he impressed after coming into the game for injured Berrick Barnes just before halftime and playing at fullback 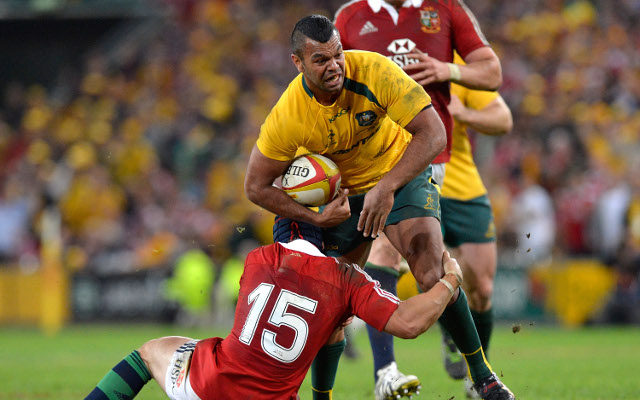 In his first frontline start for more than three months, Beale was dangerous in attack but his lack of match time was shown by a missed tackle for Alex Cuthbert’s try and ignoring an opportunity to give the ball to the outstanding Israel Folau in space.

Beale’s effort came on the back of recent treatment for alcohol-related problems and he justified coach Deans’s faith in him with some lively attack.

Deans also has an option with Christian Lealiifano, whose Test debut only lasted less than a minute after he was knocked unconscious in making a tackle on Lions centre Jonathan Davies.

Lealiifano was carried out of the game but recovered sufficiently from the head blow to take his place on the sideline and watch the remainder of the Test.

O’Connor said the slippery Suncorp Stadium surface did not help with goalkicking but did not want to make excuses for a loss that hurt more than the 2011 World Cup semi-final.

“We could have won that game,” he said. “It was right on a platter at the end there for us.”

But the surface did not affect the goalkicking performance of Lions fullback Leigh Halfpenny, who continued his prolific scoring form on tour with two conversions and three penalties from six attempts at goal.