International courier service DHL has come in for some heavy criticism after a Facebook post asking for ‘likes’ off the back of F1 driver Jules Bianchi crashed on Sunday.

There German company posted photos of the diver on their Facebook claiming that liking the post would equate to sending ‘good wishes’ to the 25-year-old as he lay in hospital. 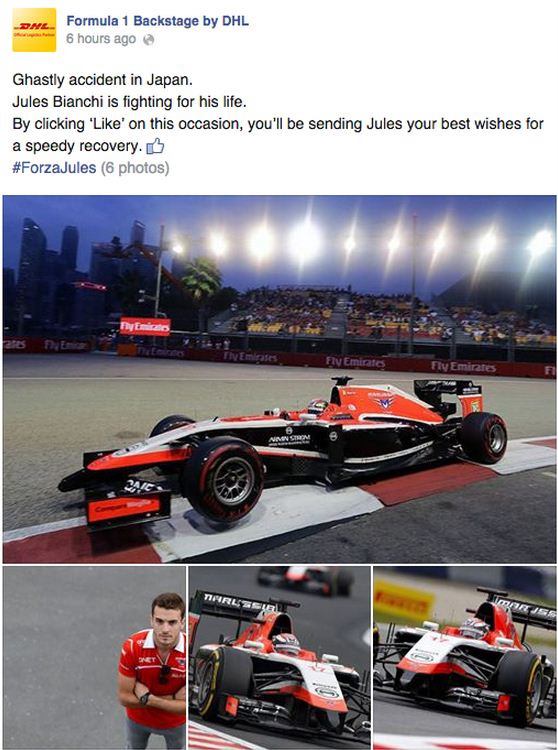 Naturally, the post was pounced upon by outraged fans, who took to their own social media platforms to register their disgust.

Shame on #DHL trying to exploit Jules Bianchi's accident for their own purposes.

How many ppl will never use @dhlexpressuk now as DHL Backstage piggy-backs on Jules Bianchi crash? Truly inhumane. Who's working for you?!

.@dhlexpressuk Don't know if you control the DHL F1 Backstage FB page, but getting likes from an F1 crash comes across as pretty poor.

Not impressed with DHL F1 Backstage asking for likes on a Facebook post to send best wishes to Jules Bianchi. Incorrect approach / tone.

Bianchi underwent surgery for ‘severe head wounds’ immediately after the crash on Sunday and is still thought to be in a critical condition.