Arsenal manager Arsene Wenger remains concerned he could lose Bacary Sagna on a free transfer this summer, but one of Europe’s best defenders wants to join the Gunners as his replacement.

Toulouse defender Serge Aurier has made no secret that he would like to join Arsenal in the future.

The Cote d’Ivoire international again told fans on social media that he was a fan of the Gunners yesterday, with the below post to his followers on Twitter.

Back in July 2013, Aurier also openly stated he hoped to join Arsenal one day – with the below posted to his protected Twitter account. 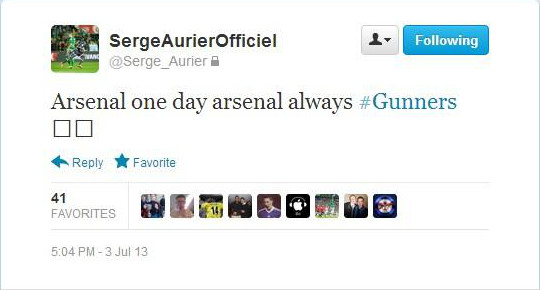 He has also posed in an Arsenal shirt on numerous occasions, including the example below:

Aurier has proven one of the best right backs in Europe this season, helping Toulouse to a solid defensive record and getting forward extremely well – as six assists in Ligue 1 this term clearly illustrates.

Given the fact that Bacary Sagna’s contract at Emirates Stadium remains unsigned, Arsenal could do far worse than look to Aurier – who certainly seems keen on moving to north London.