The attacking midfielder, younger brother of Blues ace Eden, beat Club Brugge’s Maxime Lestienne and Anderlecht’s Silvio Proto, who was named goalkeeper of the year, to the award.

The 20-year-old was also named young player of the year, while his Zulte-Waregem boss Francky Dury won coach of the year. Another Chelsea loanee, Thibaut Courtois, currently at Atletico Madrid, was named the best Belgian abroad. 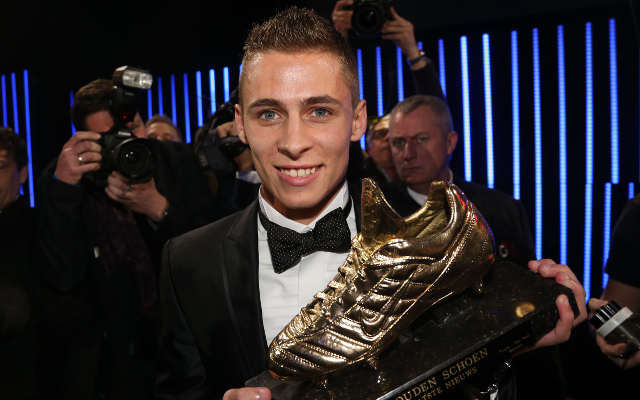 Hazard has scored 9 goals in 22 appearances for loan side Zulte-Waregem in the Juliper League and has also shone for the minnows in the Europa League.

Like his illustrious older brother, the youngster typically plays in the ‘hole’ or the on the wing.

Hazard was not favourite for the award but triumphed in the second round of voting, becoming the first Belgian to win the Golden Boot since Axel Witsel in 2008.

“I had no stress, but it was not an easy night. I was for many the favourite and so I wanted to win this trophy,” Hazard to Belgian source sporza.be.

“I am very pleased with this recognition. This prize is for the whole team, who had a magnificent 2013,” Hazard added.

Hazard has been linked with another loan move to title-challengers Anderlecht and did not train today. The winger had an explanation, however, insisting his absence was not transfer related.

“I was with my daughter, who is sick.”

“The past few days started the pressure of the Golden Boot and transfer troubles still weigh on me. There is too much talk about me.”

Hazard also said he was focussed on winning a place in the Belgium squad for next summer’s World Cup after winning his first cap last year.

“Whether this award will change anything for me, I do not know. I have to keep working hard. This Golden Boot does not take me directly to Brazil. I will have to perform to get there.”