The child, named Finley, had been kept from the prying eyes of the press, but the couple released a photo of the youngster on his official Facebook page. 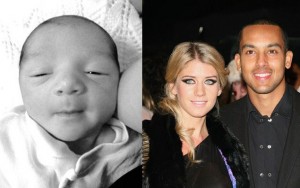