England manager Roy Hodgson named a youthful England squad for the upcoming internationals against Lithuania and Italy this week. Players include Ryan Mason, who was called up following injuries to fellow midfielders, and in-form Harry Kane and people are now second guessing England line-ups for years to come.

Here’s our effort, and we’re pretty confident it’ll be a brighter few years for the Three Lions.

The 22-year-old goalkeeper arrived at Stoke under much fanfare of being England’s next goalkeeping hope. It hasn’t really happened for him since, but at a young age he has time on his side and will be stood in good stead through plenty of loan spells at Championship clubs.

Shaw had a sparkling debut season in the Premier League with Southampton, even earning himself a call-up to the England squad which travelled to Brazil for the 2014 World Cup. He has suffered from niggling injuries since his move to Manchester United, but his future looks bright nonetheless. 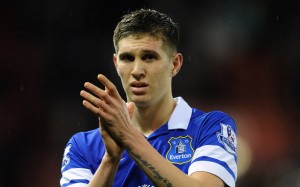 A player who has catapulted his career forward in recent years. In 2013 he moved to Everton from a struggling Barnsley side and hasn’t looked back since. Stones has made 18 appearances this season and shows mature performances which belie his age.

Like Shaw, Chambers is another who made his name at an impressive Southampton academy. The defender has been a first-team regular for Arsenal this season, making 27 appearances, and seems to have seamlessly swapped the south coast for the north London giants.

The 23-year-old full back has a genuine case to feel disappointed at his lack of England caps so far, with his main competition being a defensively lacklustre Kyle Walker. You can bank on seeing Clyne as England’s first choice in the next five years.